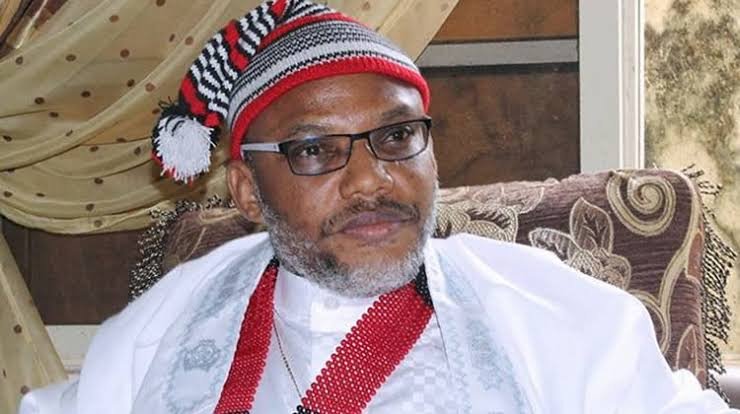 Detained leader of the Indigenous People of Biafra (IPOB), Mr Nnamdi Kanu has arrived the Abuja Division of the Federal High Court, venue of his trial over allegations of terrorism and treasonable felony.

Although his visuals could not be gotten, he was however believed to be among a convoy of about six vehicles that drove into the court premises around 8am on Thursday morning by operatives of the Department of State Service (DSS).

The convoy was led by a black Prado jeep, followed by two Hilux, two buses and other two other Hilux.

Before his arrival, security operatives including DSS, Nigerian Army, Police and the NSCDC had condoned off all enterances leading to the headquarters of the Federal High Court, Abuja.

Even staff of the Federal High Court had to alight from their staff bus to be screened before they were allowed to go in.

Nnamdi Kanu was arraigned alongside four others on six count criminal trial charge bordering on alleged terrorism and treasonable felony in 2016.

He pleaded not guilty to the charges and was admitted to bail in the sum of N100 million with three sureties in like sum, one of which was a serving Senator, Enyinnaya Abaribe.

However, he had jumped his bail in 2017 after his family house in Afarukwu, Abia State was invaded by personnel of the Nigerian Army.

Following the jumping of his bail, trial judge, Justice Binta Nyako had voided the bail and issued a warrant for his arrest.

After nearly four years of being a fugitive, he was re-arrested by security agents in collaboration with interpol and brought to Nigeria in late June to face his trial.

At the proceedings in July, his trial could not go on because of the failure of the DSS to produce him in court.

Justice Nyako had held that the court could not try him in absentia now that he has been re-arrest and in the custody of the federal government.

She accordingly adjourned to today for his rearaignment.

Only few days ago, the federal government had amended the charge to seven.

It would be recalled that the court had in 2019 separated Kanu’s trial from the others after he jumped bail and ordered his trial in absentia.