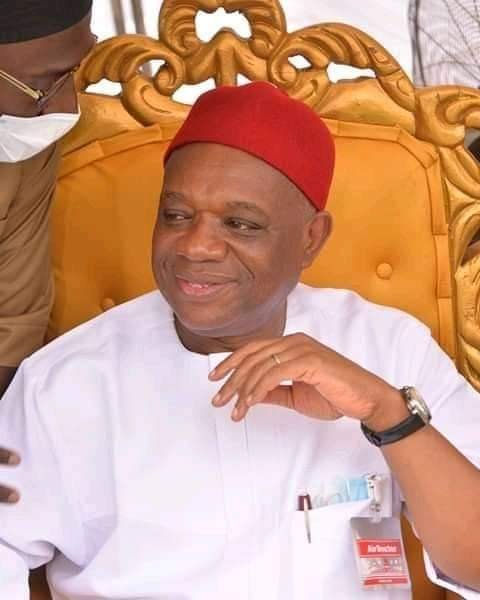 1
SHARES
14
VIEWS
Share on FacebookShare on TwitterShare on WhatsApp

Best thing that happened to Abia North Senatorial Zone was electing Dr Orji Uzor Kalu to the Senate . No senator would have been able to accomplish what he has achieved in these few months despite the six months of incarceration. Thank God the Senate leadership did not listen to wailers who wanted his seat declared vacant.

A seat many had occupied for longer period with next to nothing to show for it in the lives of our people. I am glad for boldly defending the Senate’s decision on the famous TVC interview , where I publicly told Nigerians that fair hearing was yet to be given to Dr Kalu and until he is heard at the Supreme Court , his right of appeal cannot be said to have been fully exhausted. This was when many were reluctant to speak up on this issue because they considered it sensitive .

What was more sensitive to me was the needs of the zone which he had assured me he wanted to take care of having missed a few of them as a Governor owing to the fight with the President that was in charge then . Today Dr Orji Kalu is impressively living up those promises he made to me in private and to Abia North in the public . Those in doubt should draw up the comparative analysis between him and the previous ones in their 17 months in office . You will be shocked at how well he has represented the Senatorial zone .

Ask around though we are very close and he raised me in politics but am one of his worst critics and would have told him if he was not accomplishing much as promised . Therefore, on behalf of Bende Federal constituency of Abia State who have mandated
me during the last town hall meeting and have asked me to publicly commend him for a job so well done so far and to pledge my support for future accomplishments considering his marks all around the Bende federal constituency, I hereby officially commend the Senator representing Abia North senatorial zone , Sen. Orji Uzor Kalu for changing the face of the zone within a short space of time in office despite initial challenges .

Truth be told it is not about the position as a Senator but the web of contacts he has built over the years , his wealth of good wills and his desire to bring dividends of democracy to the people of Abia North. Instead of influencing the projects out of our zone on selfish grounds he is insisting the electorates must experience the dividends of democracy from the present Government of APC. He is doing well and we are following his foot steps . No wonder the APC as a party is the most beautiful bride in Abia State today .

While we leave the big projects for him to handle we partner with him to cover the small ones . Because we are in it together ; The beauty of synergy , political cohesion and dedication to one goal under loyalty . Thanks for setting a good example for those of us that you are leading .

Abia North has not seen any thing yet , watch out for more in the coming years. We came to sincerely serve our deprived people , it is not about us it is about you the people . The people irrespective of political affiliation should encourage and support good governance, isn’t that what democracy preaches ?

I have been seen severally supporting any good works of the government of the state , where they score higher . Politics should not blindfold us away from truth and reality . Yes constructively criticise but to condemn where you ought to commend is not necessary. Does my political weight go down because I said well done to an opposition party who has scored a good point for the electorates ? The answer is no . If actually, we are in politics for the people , it should not be about self .

Often, others complain not because they are not seeing but because political blackmail is a strategic tool for them to attract a biased attention to their self centred needs over and above that of others . It is not effective once discovered, effective lobbying of the office holder is more strategic than blackmail and unfounded criticisms. There is still honour and truth in political governance remember as I have always said “ we were first brothers before we became politicians and will still be family after politics “. Therefore, let’s not destroy what holds us together first as a people .

There is no smartness in seeing the truth and politically or diplomatically speaking against it . See that Dr Orji Kalu is working and encourage him to do more for the zone rather than play to the gallery of pettiness against truth that stares in the face.

Welcome to a brief summary of the catalog of some of his numerous interventions spread across the zone in the last 17 months ( even while he was incarcerated he worked for Abia North);

17. Supply of rice and fertilizers for rural women in the 5 LGAs of Abia North Senatorial District, N200m.

Abia Govt to support private institutions as College of Medicine, Gregory Varsity is set for accreditation

ENUGU: Oruku community protest killing of their king by policemen

ENUGU: Oruku community protest killing of their king by policemen