Hon. Barr. Ekene Okenwa (Ochedo Enugu) was a local government chairman of Nkanu West. We my recent investigation about him, he is a man who has earned himself a special place in the history books as not only the best LG chairman so far produced in any Local Government in Enugu State since the return of democracy in Nigeria (1999) but also the humblest, and grassroots personally, yet with high moral standing, virtues and quitesentinel.

His heart, his personality, his disposition, his priorities as LG chairman then and now were devoted to the strengthen the advancement of his people towards a better society.

As a chairman, he understood the responsibility of providing basic services to the rural communities. Unlike this days when, in fact, in most cases, local government chairmen have no projects at all, let alone the ones impacting the rural people.

Though I have come across the name Okenwa as a former Loca Government Chairman of Nkanu West but I have never met him before. I heard about his inticidents and the mountainous legacy projects he left before as a local government chairman 12 years ago, yet I thought they were rhythmic of political syciphancies.

Just recently, during the yuletide, I decided to honour my coursemate”s invitation to Akpugo Nkanu. Driving on smooth asphaltic tarred road from Agbani, soon, I arrived the ancient Oriemba Okpugo. I was directed to drive straight for another half kilometer and take right. Before time I was there. I drove for another 18Km asphalt tarred rural road. To the end, I asked my friend if it was State government project? He said no. The road was constructed by Hon. Okenwa in 2010. I was surprised that a road constructed 12 years ago has no porthole till date, despite the vehicular traffic.

Surprised that a council chairman in a low IGR local government Area in Nigeria could executive such durable road project, Instantaneous, I turned to journalist. I requested my friend to take me to all roads and other projects constructed by Okenwa during his time we LG chairman, at least I can do a documentary, for our armchaired LG Chairmen in my State to emulate. Without hesitation, zoom, we took off, visiting several other roads constructed solidly by Okenwa which have outlived hundreds of roads constructed by governors in the past and present.

My tour ended at the local government secretariat in Agbani where I was told he tarred the entire secretariat with beautiful landscapes and car pots.

As chairman, he advanced initiatives that modernized his council area and made it a larger magnet for business and other developmental activities.

Apart from roads, he embarked on other projects which still remain unbeatable.

Truly, Okenwa’s is a man of transparency, collegiality with ‘reconceived governance’.

I look forward to meeting him for an exclusive interview on How-He-Did It, to be published in Time Africa Magazine.

Hustle a curse, it takes God for Igbos to give money – Pastor Biodun Fatoyinbo 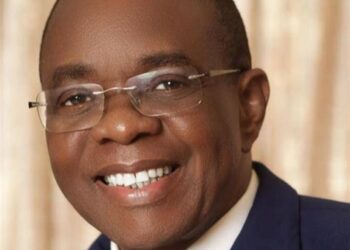