Activist Eholor commends Edo out-going Chief Judge Edigin on fight for Independence of the judiciary, asks successor to it take to next level 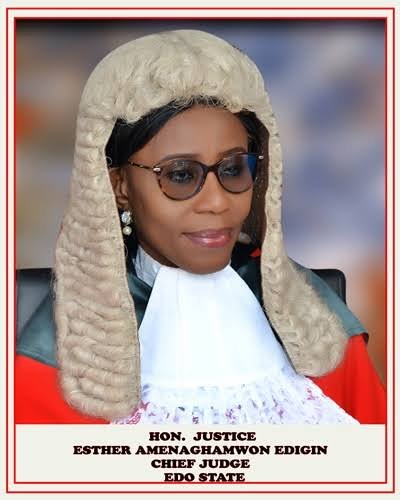 The President of One Love Foundation -Chief Patrick Eholor also known as Ultimate Equal has commended the Chief Judge of Edo State, the Hon Justice Esther Anenaghamon Edigin for her stance in following the Rules of Law in the Administration of the Judiciary in Edo State.

In a statement in Abuja on Wednesday, May 5,2021, Chief Patrick Eholor stated “I was proud of My Lord’s boldness and intrepidness in stating things as they are as it concerns the Independence of the Judiciary in Edo State at the opening of the Nigerian Bar Association, Benin Branch’s 2021 Annual Law Week, when My Lord pooh-poohed the false comments of Edo State Governor -Godwin Obaseki, that the Judiciary in Edo State is independent.

“The comment has reverberated all through the blogosphere and it has reenergized the battle for the independence of the judiciary in Nigeria, which has reached it’s fever pitch. We want the in- coming Chief Judge of the State -the Hon Justice J.I. Acha to sustain the tempo and take it to another level”, he said.