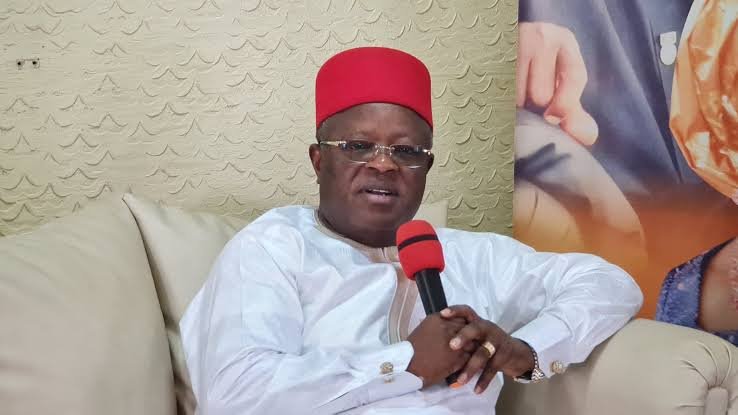 In 2023, the three Senatorial Districts of Ebonyi State would have taken turns in producing governors of the state known for its potential in agriculture.

It started with Sam Egwu (Ebonyi North) to Martin Elechi (Ebonyi Central) and now to David Umahi (Ebonyi South). Barring unforeseen circumstances, all the zones would have enjoyed eight years in office after Governor Umahi completes his tenure in 2023.

A charter of equity by the founding fathers before the creation of Ebonyi had indicated that gubernatorial power will rotate between the Afikpo and Abakaliki blocs that make up the state. However, on creation, the Abakaliki bloc formed the North and Central Senatorial Zones with the Afikpo bloc forming the Southern Senatorial zone.

So far, the governorship power has rotated among the three Senatorial zones of the state.

Though there has never been any convincing evidence to back up such agreement, as Daily Sun gathered that the document was not eventually signed by all the parties but political leaders in the state have always followed that arrangement in deciding the leadership of the state, hence, it has become some form of convention. This was among the reasons Ebonyians opposed former Governor Elechi when he attempted, albeit out of anger and frustration to impose Chief Edward Nkwegu from the North on the state in 2015 as his successor.

No plans to frustrate 2023 elections, we won’t spare anyone using our name to disrupt political process— IPOB

2023: ‘Jonathan Refuses To Resolve Atiku/Wike Feud, Yet To Forgive Atiku’

Elechi’s move then was occasioned by the gang up against his preferred candidate, Prof. Onyebuchi Chukwu from Afikpo, who was Minister of Health at the period.

But the political realities in the state today present a clear threat to the zoning principle in the state as the two major clans in the state, the Izzi and the Ezza people from the North and Central Senatorial zones respectively, insist that it is their turn to govern the state in 2023.

Ezza and Izzi are the two most dominant and unarguably the most populated clans in the state. And because of their huge population and ubiquity, they are not only conspicuously dominant but they have always been very influential in determining the swing of electoral victory in every gubernatorial contest in Ebonyi.

Their numbers notwithstanding, 25 years after the creation of Ebonyi State, the two clans are yet to produce the governor of the state despite their unquestionable influence in the politics of the state.

However, ahead of the 2023 general elections, the two clans appear battle-ready to change the narrative. While the unwritten power rotation agreement in the state since 1999 favours the Izzi people, their Ezza brothers, say it is their turn to produce the governor being the eldest clan in the state. They also argue that allowing them produce the governor will be in appreciation of the contributions of some of their illustrious sons like the late Dr. Ofia Nwali, to the creation of the state.

To announce their readiness to produce the next number one citizen of the state, the Ezza in a communiqué recently published in some national dailies and signed by the traditional rulers and political stakeholders, said they were ready to produce the governor of the state in 2023.

But the Izzi people had in 2019 announced that it was their turn to govern the state in line with the zoning arrangement in place since 1999. The Izzi argued that given that the first civilian governor of the state, Dr. Sam Egwu, is from Ohaukwu in Ebonyi North, it was their turn because the remaining three local government areas in the zone are all Izzi because Ohaukwu should not be contesting again.

The Izzi clan appealed to all political leaders in the state to respect the ongoing zoning principle in the state for the interest of peace and unity of the state.

One of the prominent leaders of Izzi and former Minister of State for Health, Chief Fidelis Nwankwo, who addressed newsmen in Abakaliki, recently, maintained that the Izzi had always supported other clans, stressing that it was time for them to be supported to produce the leader of the state.

The rivalry and competition between the two clans over who produces the next governor of the state has been aggravated by the recent defection of the State Governor, Umahi, to the All Progressives Congress (APC).

While the position of Gov. Umahi was not yet clear on which zone he will be supporting in 2023, it is safe to posit that the governor is most likely to support the Izzi based on his observable political actions and utterances since he won his re-election in 2019.

The issue may have taken a new dimension with the declaration by some Ebonyi indigenes, under the platform of Association of Ebonyi State Indigenes in the Diaspora (AESID) that zoning be discarded in the next governorship election. They said competence and credibility should instead determine who emerged the next governor of the state and not zoning.

In a statement in Abuja, January 10, by its president, Paschal Oluchukwu, the association implored Ebonyi indigenes to screen aspirants thoroughly and pick the one that had the capacity to handle the challenges facing the state.

It also urged Ebonyians to ignore “paid political permutators, jobbers and hatchet men, misleading, misdirecting or misinforming Ebonyi people as they battle to choose a credible and competent leader who would take-over the baton as Governor David Umahi’s successor.

“First, AESID wishes to assert that the number one criteria which we implore every Ebonyian and lover of our state to seek out in any intending aspirant or candidate, is competence and credibility which would ultimately translate into such a leader’s capacity to reverse the numerous negative statistics and economic woes in our state. Much more than the zone of an aspirant, AESID would implore Ebonyi people to continue to study the records in and out of office of any contender and place same side-by-side with the prevailing challenges facing the state and seek out for only those who can reverse the negative indices.”

The group argued that the economic prosperity of Ebonyi people was more important than the antiquated zoning of political positions that would not afford them to put their best foot forward as Umahi’s successor in 2023.

However, as we move steadily towards 2023, some chieftains across party lines from the two zones are already warming up to contest the governorship and who will ultimately influence the shape of things ahead of 2023.

Below are the names of top 10 contenders aspiring to succeed Governor Dave Umahi.

Born on September 2 1958 in Nwofe-Agbaje area of Izzi clan, Engr. Mba, attended Hartford State Technical College in the U.S. 1977 – 1979 for Associate Degree before moving to University of Nigeria, Nsukka where he bagged a bachelor’s degree in electrical engineering in 1984.
Ebonyi next governor
Elias Mbam

An Engineer by Profession, Mbam was Chairman of Ebonyi Board of Housing between 1996 and 1998 and served as commissioner of Works, Housing and Transportation in Ebonyi State from 1999-2005 before becoming the finance Minister of State between 2006 and 2007 where he chaired the monthly Federation Account Allocation Committee (FAAC).

He is currently the Chairman of the Revenue Mobilization Allocation and Fiscal Commission (RMAFC).

Ugbala is currently the Secretary to the Ebonyi State Government (SSG). He hails from Ezza South Local Government Council. He Academican turned Politician is a Former Lecturer at the Department of Public Administration, Ebonyi State University. Ugbala served as Senior Special Assistant (SSA) on Internal Security to Governor Umahi between 2015 and 2019. He was appointed as SSG on the 18th of June, 2019.

Popularly known as Anatex, the 44years-old Politician began his political career as Senior Special Assistant (SSA) to the Bayelsa State Government on Non-indigene Affairs. Anayo is currently a Second-term Lawmaker representing Ezza North/Ishielu Federal Constituency in the House of Representatives.

Ogbaga, 59 was the Chairman of Abakaliki Local Government Area between 1999 and 2002, he simultaneously served as Chairman of ALGON, Ebonyi State Chapter. The Fourth-term Lawmaker is the Member representing Abakaliki/Izzi Federal Constituency in the House of Representatives.

Ogba, 59 is a Second-term Senator representing Ebonyi Central Senatorial District in the Nigerian Senate. The Ishielu-born Politician is also a Former Commissioner for Youths and Sports in the State who served under the Sam Egwu-led Administration.

Odoh, 45 is the immediate past Secretary to the Ebonyi State Government (SSG). The Academician turned Politician was formerly a Professor of Geophysics at the Nnamdi Azikwe University, Akwa. Odoh was the 2015 APC Senatorial Candidate in Ebonyi Central as well as a 2019 Governorship Hopeful.

Ucha, 62 is a Lawyer and Politician who was the Pioneer Speaker of the Ebonyi State House of Assembly (1999 – 2003). The Ezzagu, Ishielu-born Politician represented Ebonyi Central Senatorial District in the National Assembly from 2003 to 2011. Ucha currently represents South-East in the National Assembly Service Commission. He is a Third-term Governorship Aspirant having contested in 2011 and 2015.

Nkwegu, 46 was the 2015 Governorship Candidate of the Labour Party. He hails from Izzi Local Area of Ebonyi State. The trained Architect and Businessman is the Largest Private Employer of Labour in the State. The Abuja-based Nkwegu is a Son-in-law to Former Governor Martins Elechi.

Usolor is popularly known as Afia Oma, He is the Son of the Late Senator Obasi Usolor who represented Ebonyi Central in the National Assembly between 1999n and 2003. Usolor is a Third-term Lawmaker representing Ezza South State Constituency in the Ebonyi State House of Assembly. He currently chairs the House Committee on Education.