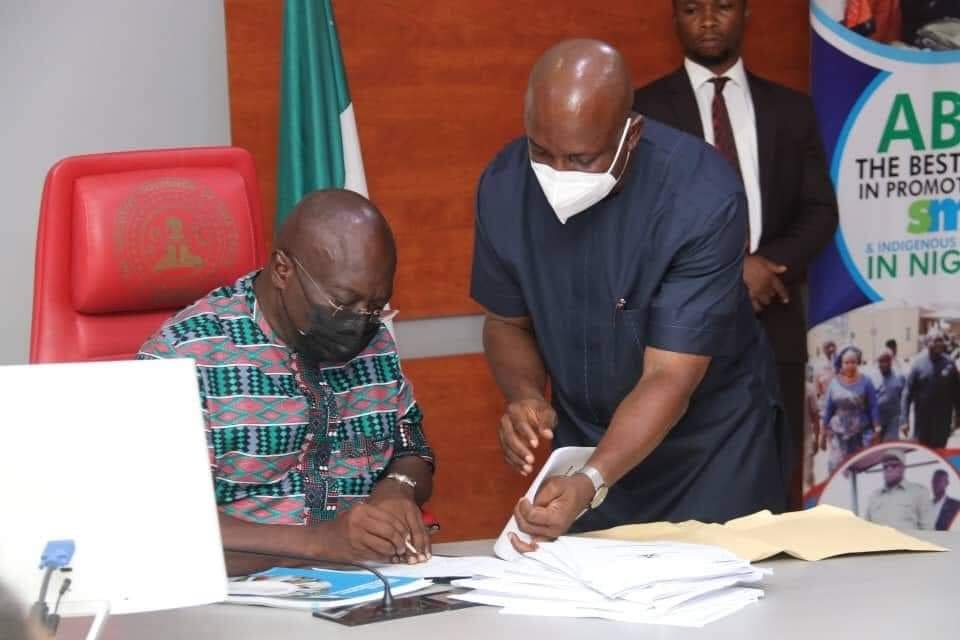 Governor Okezie Ikpeazu has signed into Law, the Abia State Water Bill 2021 which was recently passed by the State House of Assembly and also launched the Abia State Water, Sanitation and Hygiene Policy (WASH). The Governor also declared a state of emergency on the WASH sector in the State.

Speaking at the event today at Government House Umuahia, Governor Ikpeazu said that the essence of the law is to provide the legal framework to guide the State actions with regard to the provision of portable water to all households in the State.
According to him, water is essential for the socio-economic development of the State as well as the building of a healthy society.

Dr. Ikpeazu said the law makes it mandatory for the government to do the needful to give water to the people, adding that it also spells out the responsibilities of the citizenry.

He further said that the WASH policy is well-thought out with about seven components as well as what the State stands to gain from it.

Dr. Ikpeazu disclosed that with the new law and the declaration of the State of Emergency in the Water, Sanitation and Hygiene Sector, people are no longer allowed to deficate in the open as it will give greater impetus to the Ministry of Environment to enforce the new regulations.
He appealed to development partners to continue to rise to the support of the State.

Presenting the Abia State Water Bill, the Secretary to the Abia State government and Chairman, Steering Committee on Water, Sanitation and Hygiene, Barr. Chris Ezem described the signing of the Bill into Law as a milestone. He disclosed that the State has continued to partner USAID E-WASH over time, adding that, the partnerships are increasing with new projects such as rehabilitating the Ariaria and Ubakala Water Schemes as well as deliver ICT equipment in the water sector. Barr. Ezem said that signing the Water Bill into Law will facilitate those projects and bring other benefits to the State.

In their remarks earlier, the acting Permanent Secretary, Ministry of Public Utilities, Engr. Friday Chika and the General Manager, Abia State Water Board, Engr. Leo Ogbonna said signing of the bill is the beginning of good things in the State as it will reduce mortality rate as a result of water borne diseases in the State. They thanked the Governor for his efforts in ensuring that the bill is finally signed into law and assured that they will live up to expectations.

Deputy Governor Sir Ude Oko Chukwu and some members of the State Executive Council, Permanent Secretaries and other top government officials were present at the event.

ADVERTISEMENT
No Result
View All Result