Profile of the new service chiefs (1) 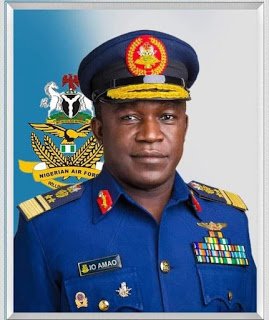 He is a fighter pilot and has participated in various operations such as: Draw Down of AFISMA operation in Mali from Aug 2013 – Jan 14, operation ZAMAN LAFIYA from 20 Feb – 19 Jul 15 and operation LAFIYA DOLE (North East operations) from 19 Jul 15 – 16 Feb 16.

AVM Amao is happily married to Mrs Elizabeth Olubunmi Amao and they are blessed with 3 lovely boys. His Hobbies include: reading, dancing, travelling, playing volley ball and golf as well as fish farming.

If you decide to count the men in uniform that are completely loyal to Nigeria and her integrity, General Lucky Eluonye Onyenuchea Irabor undoubtedly counts among the top ten.

He was recognized with the Nation Builders Award of Excellence in Soldiering on the 27th of November, 2020. Major General Irabor who is currently the Commander, Training and Doctrine Command, Minna has lived most of his adult life for Nigeria and her national security. His most recent postings have been highly strategic because of the calibre of officer General Irabor is.

Major General Lucky Eluonye Onyenuchea Irabor was born on 5th October 1965 in Aliokpu Agbor, Ika South Local Government Area of Delta State, Nigeria. He gained admission into the Nigerian Defence Academy (NDA) Kaduna as a member of the 34 Regular Course in 1983 and was commissioned Second Lieutenant on 28 June 1986 into the Signals Corps of the Nigerian Army.

Major General Irabor attended several military and civil courses both locally and abroad. He attended Armed Forces Command and Staff College (AFCSC) for his Junior Staff Course in 1995 and Ghana Armed Forces Staff College Teshi, Accra Ghana for Senior Staff Course in 2000/2001 amongst other several military courses. Also, he attended National Defence College in Bangladesh in 2010 and Harvard Kennedy School of Government, USA in 2012 and 2017. Major General Lucky Irabor is a trained Engineer from Obafemi Awolowo University and interesting, he holds two Masters Degrees from University of Ghana, Accra and Bangladesh University of Professionals, Dhaka.

Always in the forefront of his assignment, as Theatre Commander Operation LAFIYA DOLE, he was in charge of 3 Divisions from the Nigerian Army, an Air Task Force and a Maritime Component. Major General Irabor was responsible for the capture of Alargano Forest – the acclaimed spiritual base of Boko Haram Terrorists. He also planned and executed the conduct of Operations CRACK DOWN 1 and 2, RESCUE FINALE and DEEP PUNCH which led to the clearance of SAMBISA FOREST, destruction of BHT camps and enclaves, capture of several weapons, vehicles and equipment belonging to BHT as well as rescued well over 20,000 civilians abducted by BHT, including 2 Chibok Girls. Furthermore, the impact of the operations he conducted forced the BHT to release a total of 103 Chibok Girls in two instances. As Force Commander MNJTF, he successfully planned and conducted Operation AMNI FAKAT within the Lake Chad Basin Area which led to the clearance and domination of Gashigar, Arege and Metele as well destruction of several terrorists’ camps and IED making factories. During his tenure, over 25,000 hostages were liberated.

After completing his time at the Operation LAFIYA DOLE, General Lucky Irabor also graciously served as the head and Field Commander of the Multi-National Joint Task Force (MNJTF). The Multinational Joint Task Force (MNJTF) is a combined multinational formation, comprising units, mostly military, from Benin, Cameroon, Chad, Niger, and Nigeria. It is headquartered in N’Djamena and is mandated to bring an end to the Boko Haram insurgency.

In 2015, when the political process of expanding the MNJTF was reinvigorated and led to swifter progress, including the expansion of troop numbers and mandate, and relocation of the HQ to N’Djamena, Chad, there were meetings held between the military forces of Cameroon, Chad and Nigeria targeted towards restoring peace and security in the various territories of these three Nations. There were very vital structural changes after these meetings like the increase in the numbers of soldiers, the creation of a new Concept of Operations under the supervision of the Lake Chad Basin Commission, and the move of the HQ to N’Djamena. It was agreed that a Nigerian officer would be the Force Commander for the duration of the mission against Boko Haram, with a Cameroonian as Deputy Commander and Chadian Chief of Staff.

Having served brilliantly as the head and Field Commander of the Multi-National Joint Task Force (MNJTF), General Irabor was transferred to Defence Headquarters (DHQ), Abuja. Here, he was the Chief of Defence Training and Operations. During the outbreak of the dreaded COVID 19, he successfully headed a Committee that was put in place to interface with all relevant Ministries, Departments and Agencies of the Federal Government of Nigeria managing the COVID 19 Pandemic. This Committee set up 17 isolation and treatment centres spread across the six geopolitical zones of the country.

Being a very proactive professional soldier, General lucky coordinated the planning and execution of Operation 777 in all DHQ led operations leading to the successful conduct of the 2019 General Elections. He initiated training and operational actions intended to optimize the effectiveness of the Armed Forces of Nigeria including the recently conducted first-ever Defence HQ Training Conference. He is also responsible for the coordination of all activities of the Department of Defence Training and Operations, Defence Headquarters, Abuja.

General Irabor without doubt, is a highly committed trainer and disciplinarian.

Like the fine utility Army General that he is, his services are almost needed everywhere. During the most recent posting by the Nigerian Army in July 2020, Major General Irabor was posted the Training and Doctrine Command (TRADOC) in Minna, Niger State as the new Commander. The Training and Doctrine Command (TRADOC Minna) is a research-oriented formation in the Nigerian Army. It is headquartered in Minna in the Niger State. TRADOC is charged with doctrinal training and combat development, supervising training centers. It also serves as a senior think-tank in Nigeria. TRADOC was formed in 1981 under the leadership of Major General Geoffrey Obiaje Ejiga, and currently supervises all the Army’s schools, as well as an army depot.

This humble General continues to ensure proper military recruitment, basic training and education of officers and men of the Nigerian Army. TRADOC supports army training and coordinates research on the development of army corps and schools. It serves as a liaison between the army and educational establishments in ensuring the professional development of junior officers in the field. When multiple army divisions concurrently deploy, TRADOC serves as a corps headquarters to direct the operational tasks of the divisions.

As a man who knows how to handle people and situations, apart from the organizational departments of TRADOC, General Lucky has the big task of taking care of 18 corps training schools, as well as a museum, a training depot and a command college and the Nigerian Military School at Zaria. Due to his sterling qualities, he has consistently won several commendations like the Chief of Army Staff Commendation Award.

Seeing all the above and very many not written here, you realize that General Irabor is indeed deserving of anything good that Nigeria has to offer. He is a man truly committed to Project Nigeria. One can without doubt observe that he is a soldier that stays alert, fit, and always battle-ready.

This senior officer is widely travelled. He is happily married and blessed with children. His hobbies include reading, jogging and listening to good music.