2023: Obinna Ichita and the Madness of an Ambition 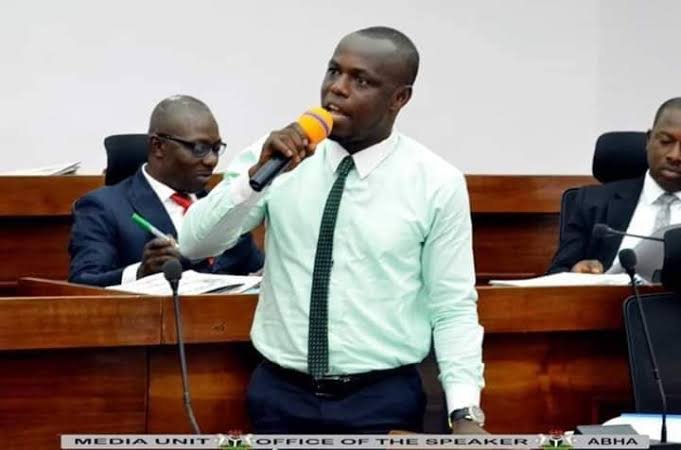 Lawmakers anywhere in the world are usually known by their quality representation of their constituents in Parliament through the canvassing of sound Motions and Bills that positively impact their people.

Even while conducting their oversight functions which is another fundamental function of a legislator, such functions are usually performed with decorum and not necessarily to play to the gallery or make media capital of. It is for this reason that House Committee members, including their leadership, all over the world are usually selected across party lines because it is an age long legislative tradition not to play politics with the issues of governance.

By his recent engagements, Hon Obinna Ichita, the Lawmaker representing Aba South State Constituency at the Abia State House of Assemvky, has inadvertently exposed his weakness as a man with no achievements in the Assembly, and at a time his lacklustre reign in the House was beginning to be questioned by his constituents, with no result to show, he decided to take to the ignominious role of peddling falsehood and weaving mischievous narratives about certain World Bank/NEWMAP projects in the State, claiming that sums that he manufactured in his head were missing.

He takes advantage of the social media where there is little or no check to noise his mischief even when it has been explained time and over again by both government and NEWMAP officials that World Bank funds for projects cannot be unilaterally accessed by government officials as payment from such facilities for projects are only released through a special project account after certification of milestones achieved.

Container falls on truck, kills one, injures 15 in Aba

The question rational individuals should be asking is, if a whopping sum of $26m (or did he say it’s $56m) was missing from the fund, does Ichita think the World Bank would need him to be the one to raise the alarm? If any kobo misses from the fund, the Workd Bank will certainly not only raise the alarm but might have withdrawn the facility in its entirety. So Ichita should stop dancing naked in the market.

In making videos of areas of concern by himself and posting same on social media, sometimes conducting interviews on the streets with a class of people who don’t understand the workings of such facility structuring, and whom he finds so easy and convenient to manipulate because of their limited knowledge of such transactions, Obinna Ichita has attracted to himself a high level of opprobrium from his constituents. They are asking why a lawmaker of his status who earns enormously cannot employ even one person from his constituency as an aide to run his media activities or even to handle his other errands to the extent that he is the one who takes his phone to market places and streets recordjg images and downloading same on social media. Apart from the fact that such self-imposed assignments give him the leverage to manipulate things, it is the height of greed the level which shocks his constituents as they are aware that other Lawmakers in the Assembky engage a number of their constituents who they pay as a way of supporting them, that is quite befuddling to neutrals. Ichita has attracted no roads, nor even graded any, nor attracted any project to his constituency except the ones initiated and being executed by the Executive Arm of Governmemt. He is about the only one with such abysmal record of representation in the Assembly as all other Members can boast of attracting or even directly doing one project or the other in their constituencies. What is worse? Ichita does not find anyone in his constituency good enough to be engaged as aides to the extent that he takes up the job which ordinarily should have been given to some constituents to do. That is how greedy a political leader he is!

We all are aware of different empowerment programmes embarked upon by the State’s Lawmakers. We are greeted almost on a daily basis with news in the media of how these Lawmakers empower their constituents through start up capital, scholarships, cash gifts to widows, trainings/empowerment of youths, health outreach, provision of electricity transformers and water borehole to communities, attracting projects to their constituencies etc. But Ichita has not been able to emulate his colleagues in the House in any of these gestures, thus makes his constituents see him as a failure, and knowing full well that he has nothing to campaign on in 2023, he has resorted to making noise in the media through blackmail by weaving falsehood, selling jaundiced opinions and even going as far as allegedly arranging his own attacks all in a bid to curry favour from unsuspecting members of the public and also to cover up for his disgraceful outing as a lawmaker

Ichita should know that his tenure as the lawmaker representing Aba South State Constituency will not be based on the excellent performance of Dr Okezie Ikpeazu who will certainly finish the Workd Bank facilitated projects in Aba and beyond, but that he, Ichita, will be judged by his own people based on what he has been able to do for them. Sadly, they all know as much as Ichita does that he has done NOTHING!

The knowledge of the consequences of such tepid tenure as a lawmaker is what is making Ichita apprehensive.

When the time comes, the same people he has been lying to will make it clear to him that they cannot be fooled and that the attention he is getting from them for now is just for its entertainment value.