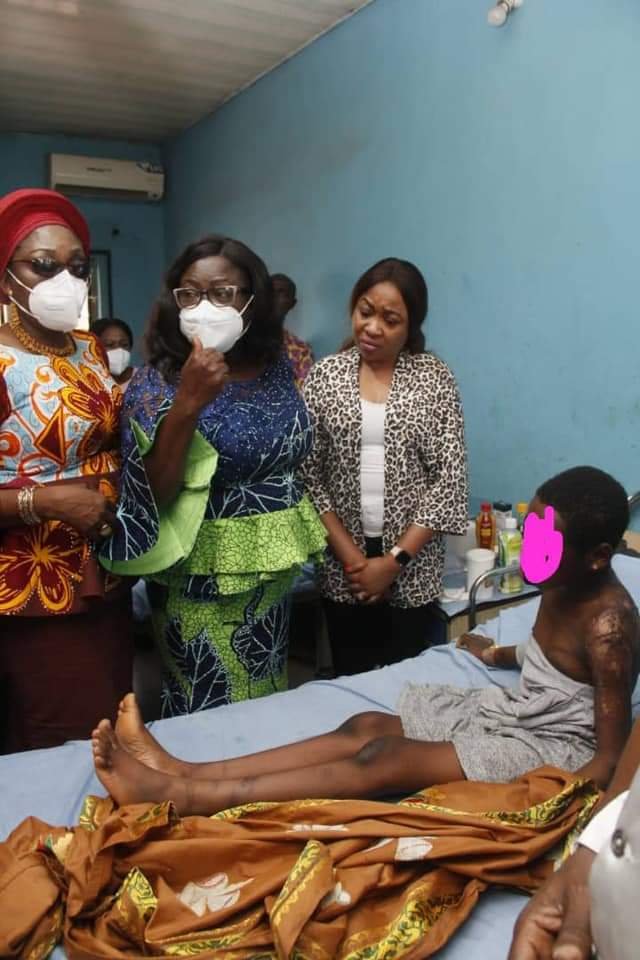 The wife of the Governor of Abia State Mrs. Nkechi Ikpeazu has taken over the cost of treatment for the 10 year old girl who was victim of serial abuse and brutality meted on her by her mistress Mrs Zazi David Orjiugo Kelechi.

Mrs Nkechi ikpeazu who paid an unscheduled visit to the hospital ward to see the child expressed profound shock at the horrific injuries on the body of the child.

She described as very inhumane and barbaric the action of the woman who is said to have force-fed the child with boiling water and also allegedly poked pepper into the child’s private parts. Medical investigations show the girl has been victimised for more than a year.

“I saw the first pictures of the injuries of girl last week and immediately I reached out to the commissioner of police Mrs Janet Agbede. She has assured me that the investigation has been sped up and the perpetrator will be charged to court. I have confidence in the police under Mrs. Agbede, she is a mother and understands the import of safeguarding our children. Last Friday I also directed the State Action Committee Against Gender Based Violence to follow up on the case and work with stakeholders including FIDA, Child Protection Network, NAPTIP and others and ensure things are done right. I am certain that justice will be gotten to serve as deterrent to others who are in habit of viciously maltreating our children,” Mrs. Ikpeazu said.

“I came to the hospital today to see things for myself and i am indeed shocked at the brutality, barbarism and the viciousness of the attacks on the little girl.

“I have directed my personal physician to join the medical team handling the girl’s care while we are also getting throat specialists and surgeons to look at her. I have made some donations towards her care and upkeep and I will also pick up her medical bills at the end of treatment.

“I have met with her parents and expressed my sympathies with them.

“However it is important that we emphasize here that parents should take care of their biological children and stop trafficking out children to people who do not appreciate or value life. Give birth to your child and care for them. Do not have more children than you can adequately train.”