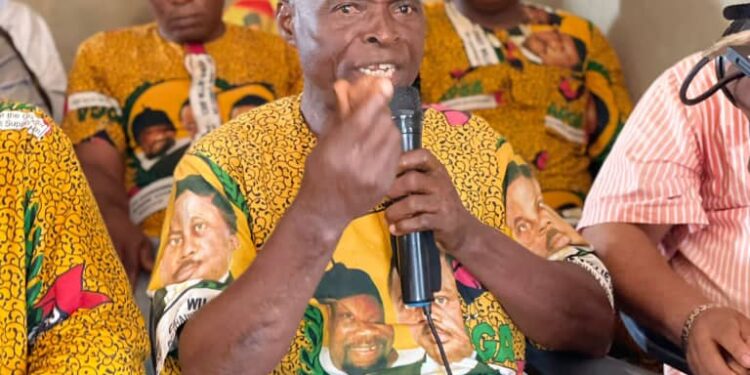 3
SHARES
27
VIEWS
Share on FacebookShare on TwitterShare on WhatsApp

Ahead of the APGA Wards Congress/delegates election, the Director of Media, Publicity and Strategy of Nze Akachukwu Nwankpo Campaign Organization Dr. Harris Chuma-Odili also known as Ogene Igbo have met with the leadership of APGA Oyi Local Government Area.

The interactive session which took place at the secretariat of APGA Oyi LGA Nteje was attended by all the Chairmen and Secretaries of APGA Oyi Wards, and LGA Excos.

Ogene Igbo assured the party leaders that the APGA leading governorship aspirant Nze Akachukwu Sullivan Nwankpo would treat them as an important part of his administration if elected and would not use them for party primary election and later dump them.

He also explained Nwankpo’s six cardinal programmes which included free and compulsory primary and secondary education, massive infrastructural developments, security of lives and properties, quality and affordable health care, food sufficiency amongst others.
He informed them that Nwankpo has scheduled to meet with all the wards executive members of the party from the three senatorial districts on saturday ahead of June 15 wards Congress.

Ogene sued for peaceful wards Congress, saying that the APGA wards Congress if conducted peacefully would produce quality delegates to the party primary scheduled for June 23. He said meeting with the wards excos was the same as meeting all party members.

The Spokesman for Nze Akachukwu Nwankpo Campaign Organization stated that the issue of wards delegates elections is a welcome development.
“The concept of conducting election at various APGA wards in the state to elect delegates to the primary has empowered party members to be actively involved in the democratic process of chosing the right man to fly the party’s flag. Eventually, power has been restored to the people, and greater sense of community established. Unlike in the past, when someone would seat at home and produce a long list of names as party delegates. Now, all that is in the past, the party members have a collective responsibility to nominate delegates for the primary election. It is no longer a one man show. This is a welcome development, most certainly a new APGA is in the horizon.” Chuma said

The new primary electoral guideline have changed the aspirants campaign tactics to wooing all the party members instead of meeting the leaders or sponsoring certain key stakeholders to manipulate the delegate list. In this new era, all delegates to the primary will be produced at the party’s wards congress through a democratic means.