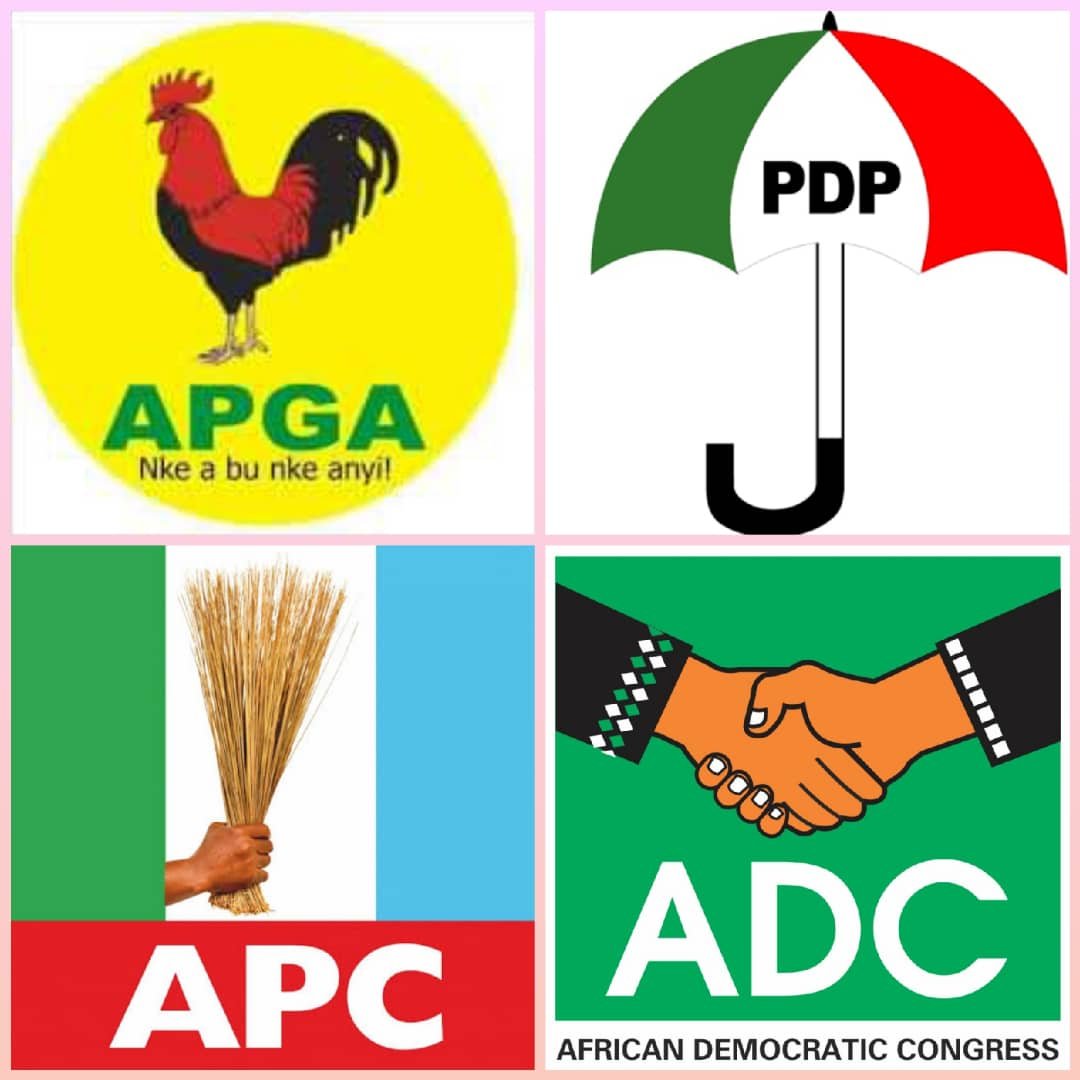 Despite the fact of internal partisan disputations about their emergence, all the six candidates but one, that won on the three parties- Prof. Chukwuma Soludo, Hon. Chukwuma Umeoji (APGA), Senator Andy Uba (APC), Senator Ugochukwu Uba and Valentine Ozigbo (PDP)- are from communities in Anambra South Senatorial District.

The third APGA standard-bearer, Chief Edozie Njoku, who contested on the basis of his Onitsha North/South federal constituency, seems to be holding ground for Prince Nicholas Ukachukwu or Soludo, depending on the judicial resolution of the leadership contest between his faction and that of Ozonkpu Victor Oye over who is the authentic chairman of APGA.

Based on the realities on the ground, new thinking has entered into the calculations on the November 6, governorship poll in the state. The unfolding arguments bother on which part of Anambra South should be supported to produce Governor Willie Obiano’s successor.

Bookmakers are currently hedging a bet that the emergence of multiple candidates from the Old Aguata Union (OAU) is evidence of the triumph of zoning calibration in Anambra State. Yet, the same zoning sentiment is currently roiling Anambra South as the governorship election draws nearer.

Prior to the governorship primaries on the various parties, the attempt by some billionaire business moguls in the state to moderate the choice of a consensus aspirant ran into a brick wall following the insistence of the Ihiala bloc to produce the next governor of the state.

Within PDP, the powers that be pooled resources together, including tactical manoeuvres to ensure that two prominent aspirants from Anambra Central, particularly Dr. Obiora Okonkwo, did not take advantage of the huge number of aspirants from the South to coast home to victory.

APGA and APC did not shy away from their belief in zoning, a development, which guaranteed that virtually all the aspirants that purchased the expression of interest and nomination forms were from the Southern Senatorial District.

Zoning after zoning
Senator Ifeanyi Patrick Ubah, the YPP candidate is the first aspirant to emerge as a candidate for the Anambra governorship poll, being that he stood unopposed in the party, which he also emerged during the 2019 National Assembly election as the only victorious candidate of the party.

Ubah, who is an oil magnate and owner of Capital Oil before he veered into elective office, hails from Nnewi, one of the three blocks that make up the Anambra South Senatorial District.

Although Ubah and his YPP are limited by the perceived poor spread in the state, the Senator runs on the contention that no Nnewi son or daughter has ever governed Anambra State since its creation. However, despite the veracity of that claim, stakeholders from other blocks argue that Dame Virgy Etiaba, who held sway as the first female state governor during the aborted impeachment of Mr. Peter Obi, hails from Nnewi.

Etiaba’s brief stint apart, some Nnewi billionaires distance themselves from Ubah’s governorship efforts on the grounds that the YPP candidate did not involve them or the community in his aspiration, adding that he is but a “one-man show governorship race.”

Also during stakeholders’ considerations of Ubah and Hon. Chris Azubogu’s governorship ambition, some Nnewi stakeholders grumbled that Ubah ought to serve out his Senatorial term instead of running as a possible spoiler to other sons and daughters that were running on the main parties.

Nonetheless, with the trouble in the big platforms, Ubah believes that he would re-enact the same magic that saw him winning the Senatorial seat after Governor Obiano and APGA chieftains reneged on the promise to gift him the party’s ticket for the 2019 National Assembly poll.

AWAY from the Ubah and Nnewi challenge, the emergence of Nze Akachukwu Nwankpo, a former Special Assistant to former President Goodluck Jonathan on Technical Matters, as the gubernatorial arrowhead of ADC, is currently dominating political discourse in Anambra State.

Much like APGA, the ADC, which national chairman, Chief Ralphs Okey Nwosu, hails from Awka in Anambra Central Senatorial District, has always been seen as a feasible platform that was left in the lurch due to the power of incumbency of APGA governors.

Nwosu, one of the founding fathers of APGA, parted ways with Chief Chekwas Okorie in 2002. That was shortly after the party’s registration, when Okorie insisted on Peter Obi, who had just crossed over from PDP, to fly the APGA flag on the consideration that Obi had the financial war chest to prosecute the governorship poll on the platform of the then inchoate APGA.

The ADC national chairman recently used the occasion of a courtesy visit on him at his country home by the ADC standard-bearer, Nwankpo, to remind Anambra electorate of the systemic murder of internal democracy in APGA, assuring that situation and circumstances in the state have positioned ADC to win the November 6 poll.

Nwosu must have alluded to the expected contest, whereas many as three candidates are sure to be on the ballot for the governorship election. Why Nwankpo’s emergence seems to be causing many ripples in the state is that the Ihiala bloc would have less serious candidates than OAU.

Whether Soludo or Umeoji runs on APGA, Uba from Uga would be on APC and Ozigbo from Amesi or Senator Uba Snr from Uga, these Aguata gladiators are sure to split the ballots of OAU voters, leaving the Ihiala vote haul for the ADC’s Nwankpo.

Regarding the religious flavour, which Mr. Peter Obi was said to have popularised, while the Uga’s belong to the Anglican faith, Soludo, Ozigbo and Nwankpo belong to the populous Catholic denomination. And the fact that Nwankpo was a seminarian brings a new dimension to the calculations.

Speaking at thanksgiving service in his Amesi community, Ozigbo, the PDP candidate, said holding the thanksgiving in Amesi for his victory at the straw poll “is symbolic as it is the place where everything began for me.”
He stated: “St. Vincent, Amesi is my home church. This is where I grew spiritually and learnt the importance of love, empathy, and the power of community. It is only natural that I come back to give thanks in this place where it all began.

“I want to extend my appreciation to the good people of Amesi who have been instrumental in whatever successes we have achieved. As we celebrate my victory at the primary election, I want to reiterate my promise to God and the people of Anambra that our dear state will experience remarkable progress if given the mandate to serve our people.
“I want to assure you that with God on our side, we will emerge victorious at the November poll, and you will be proud that your son is the best governor Anambra has ever had.”

It could not yet be ascertained to what level religious denomination would play in the forthcoming polls, but the demographic imbalance between Catholics and Anglicans, including Pentecostals, have always tilted the ballot in favour of the populous Catholics. Apart from Dr. Chinwoke Mbadinuju, who was a Pentecostal, Dr. Chris Ngige, Obi and the incumbent Obiano were all Catholics.

That could explain why Nwankpo in his acceptance speech after clinching the ADC ticket declared that God would have the final say on who becomes the next governor of Anambra State, just as he did not forget to pride in his native community.

He assured that “no matter the level of madness being perpetrated in Nigeria, as a Governor, nobody will come to Anambra state and kill people of Anambra and go free under my watch!”

While Soludo, the Ubas, Ozigbo are from the OAU, another aspirant, Dr. Godwin Maduka, who claimed that he was schemed out of the PDP by party influences, joined the league of OAU candidates by netting the ticket of Action of Alliance (AA).

Knowing how things go in elections, there is no doubt that with his famed deep pocket and impregnable war chest, the US-based Pain Specialist would carve out his own share of the ballot, not minding that AA and YPP stand out as fringe players.

Would all these calculations favour the return of Ihiala bloc to the Government House through the ADC and Nwankpo?

It would be recalled that at the height of the zoning agitation, the Ihiala bloc argued that the denial of Mbadinuju from completing two terms in office should be compensated by ceding the governorship tickets to them.

As things stand now, the Anambra electorate has the opportunity to decide what consideration should inform the emergence of the next governor. That would indeed turn out as the ultimate zoning within the zone.