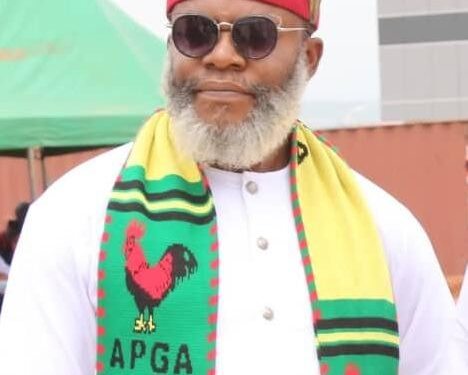 2
SHARES
15
VIEWS
Share on FacebookShare on TwitterShare on WhatsApp

The political climate in Anambra seems to be reaching a boiling point. With the party primary elections set to open next month, currently, a lot of press and ‘beer parlour’ talk revolves around the possibility of the ruling All Progressives Grand Alliance APGA presenting the right person to lead the party to the November 6, governorship polls.

“Over the past several months I have been encouraged by the number of party stakeholders, party grassroots supporters that have encouraged me to stand for the governorship election. I’m in the governorship race because Anambra needs a steady hand in these times of uncertainty. If elected as the governor, I will make ndi Anambra proud. My mission is to bring back the family values and give voice to the people. Our government will rest on the Anambra families shoulders; every family will be involved in the governance process of the state. I came prepared, and will hit the ground running. It’s going to be work, work, work.”

As the APGA gets set for the governorship primary election, the party will need a voice that listens to the people. A face the electorates would resonate with; face that would take the state to the next level of developmental governance. One who would sustain the success story the party has recorded over fifteen years of productive rule in Anambra.

Do not keep mute, do not sit on the fence, do not be discouraged, dismayed, and or dejected, APGA is not going to die. Rise up and support the man with the key to the APGA’s new world. As for the party delegates, do not waste your time and energy packaging a non-electable personality to represent APGA at the November 6 polls.

Think, time ticks, whoever wins your heart with money, would treat and use you as his property, ready to discard you at will. Bear in mind that the future of our great party APGA, and that of Anambra rests comfortably on our own hands. We have been called to save APGA, we must not be decieved by desperate politicians who see the party as “personal property”, and would prefer mobilizing their friends and families to serve as delegates at the primary election, all in a bid to impose their choice candidate. This, they planned to back up with heavy financial inducements. Biko, please, take their money but vote your conscience.

Think, and listen to the voice of wisdom, do not vote against your conscience; those who voted for monetary gains are still wallowing in abject poverty. They are no longer in the picture, many have taken their grievances to other political platforms.Those who buy your conscience today, will not need you tomorrow when they grab power. They will only use you as an electoral tool, and dump you.

Follow me, a support for Akachukwu Nwankpo is a rejuvenation of the APGA, a revitalisation and rekindling of hope for a bright and rewarding future. Nwankpo as your governor will be reachable; he will be visible, he will not shut the doors against you. He will be right in your homes, he will be with you in every situation, and will not abandon you. Think, take a bold step. It is now or never. Time ticks!

2023: Enugu electorates must decide who governs them, not a few elites, says ESCSEG Coordinator, Onyendozi