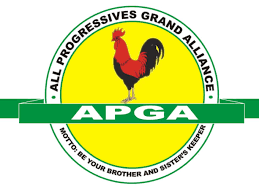 THE CRUX OF THE MATTER

In 2020 Chief Edozie Njoku filed an application in suit no: FHC/BAU/CS/ 10/2020 for an Order of Mandamus to compel INEC to recognize him as the National Chairman of APGA based on earlier court rulings & judgments.

On September 28, 2020, Oye filed an application for joinder and sought for the removal of APGA’s name through Barr. Sylvester Ezeokenwa, the self-acclaimed National Legal Adviser of APGA. The motion to strike out the name of APGA by Oye was heard on November 24, 2020, while ruling was reserved for December 10, 2020.

By December 10, 2020, Hon. Justice A. R Mohammed, the trial judge, in his infinite wisdom reasoned that granting Oye’s applications amounts to an ambush on the court to declare him the National Chairman of APGA through the backdoor; because taking a position on Oye’s application will invariably amount to taking decisions that touches on the sustenance of the suit at an interlocutory stage.
Consequent upon this finding, the court walked away from Oye’s trap and reserved ruling during the hearing and determination of the substantive suit.
It is against the backdrop of the above interlocutory decision of the trial court that Oye rushed to the Appeal Court Abuja on December 16, 2020.

Oye’s Appeal came under Suit No: CA/ABJ/CV/06/2020 and he rented Bode Olanipekun. The plan was to bamboozle the Appellate Court for them to prevail on the Lower Court to see him as a victim. Therefore, Oye’s journey to the Appeal Court Abuja was because the Federal High Court decided to hear all the matters in the suit before giving judgment. Oye and his cronies felt so uncomfortable with the benign intention of Justice A. R Mohammed and thus began their journey to procure judgement by every means necessary.

It is worthy to note that while the substantive suit at FHC Abuja was still pending, coupled with the Interlocutory Appeal which they initiated, Oye desperately abandoned these suits and ran to Justice C. C Okah’s court at Awka to purchase two Eke Awka Judgments and also to Ororekpe Delta and Bauchi State High courts to buy more Judgments. We have always known that a day like this would come which will expose how Oye neglected pending suits at the Courts and shopped for quasi judgments from one court to the other.

It is up to the discerning public to inquire why it was difficult for Oye to wait for the FHC Abuja and Appeal Court Abuja to settle APGA leadership crisis, instead of running from one state high court or the other shopping for Judgments just to remain afloat. Oye believed that rushing to Appeal Court on Interlocutory Appeal would give him a speedy judgment to enable him commence reaping off the potential aspirants for Anambra election.

On Friday September 17, 2021, the three-man Appeal Panel comprising of Justice Abubakar Sadiq Umar, Justice Sybil 0. Nwaka Gbagi and Justice Ibrahim Waliki Jauro understudied Oye’s Appeal and took a clinical appraisal on the matter and arrived at unanimous Judgment read by Justice Ibrahim Waliki Jauro which affirmed that Justice A.R Mohammed was in order by reserving ruling until the entire matter has been argued. They also queried the basis for Oye’s Interlocutory Appeal. The learned Bench made it clear that appeals do not perch on nothing. They insisted that Oye’s appeal was frivolous, empty, plain and vain and an abuse of court process.

The appeal seemed to them like the action of a robber that smartly rushed to the nearest police station, pretending to be a responsible citizen in pursuit of justice, but, unfortunately, when the matter began, it was astonishingly discovered that the fellow was out to derail justice and mock the bar and the bench.

A mild drama ensued at the Appeal Court Abuja, when Bode Olanipekun, SAN tried to mislead the three man Appeal panel by insisting that APGA leadership crisis had been resolved by Kano Appeal panel. The Judges, in their vehemence, expressively and categorically told him that Kano Appeal focused on Jigawa judgment which it simply nullified for want of territorial jurisdiction, and for not joining necessary parties. Therefore, they maintained that Kano Appeal Court lacked the primary and preliminary details to resolve the APGA leadership crisis. Their position was that the substantive matter subsists and should be tried independently on its merit. The Appeal Court Abuja refused to entertain any ambush or fraudulent politico – legal technicalities.

While reading out the judgment on behalf of its colleagues, Justice Ibrahim Waliki Jauro, in his utmost wisdom, looking at the facts and circumstances of the matter and citing extant judgments and legal authorities referred Oye back to the FHC Abuja and reasoned along the position of Justice A. R Mohammed that delivering the ruling, as it is being pressured, would touch on the substantive suit.

The Appeal Court, therefore, ordered the Federal High Court to grant accelerated hearing to the substantive suit bordering on the Order of Mandamus on INEC to recognize Chief Edozie Njoku as the only rightful National Chairman of APGA.

Once more, we urge our quintessential and teeming members and supporters of APGA that we shall continue to furnish them with undiluted truth at all times, no matter how unfavorable and uncomfortable it may seem.

APGA – BE YOUR BROTHER’S KEEPER!!