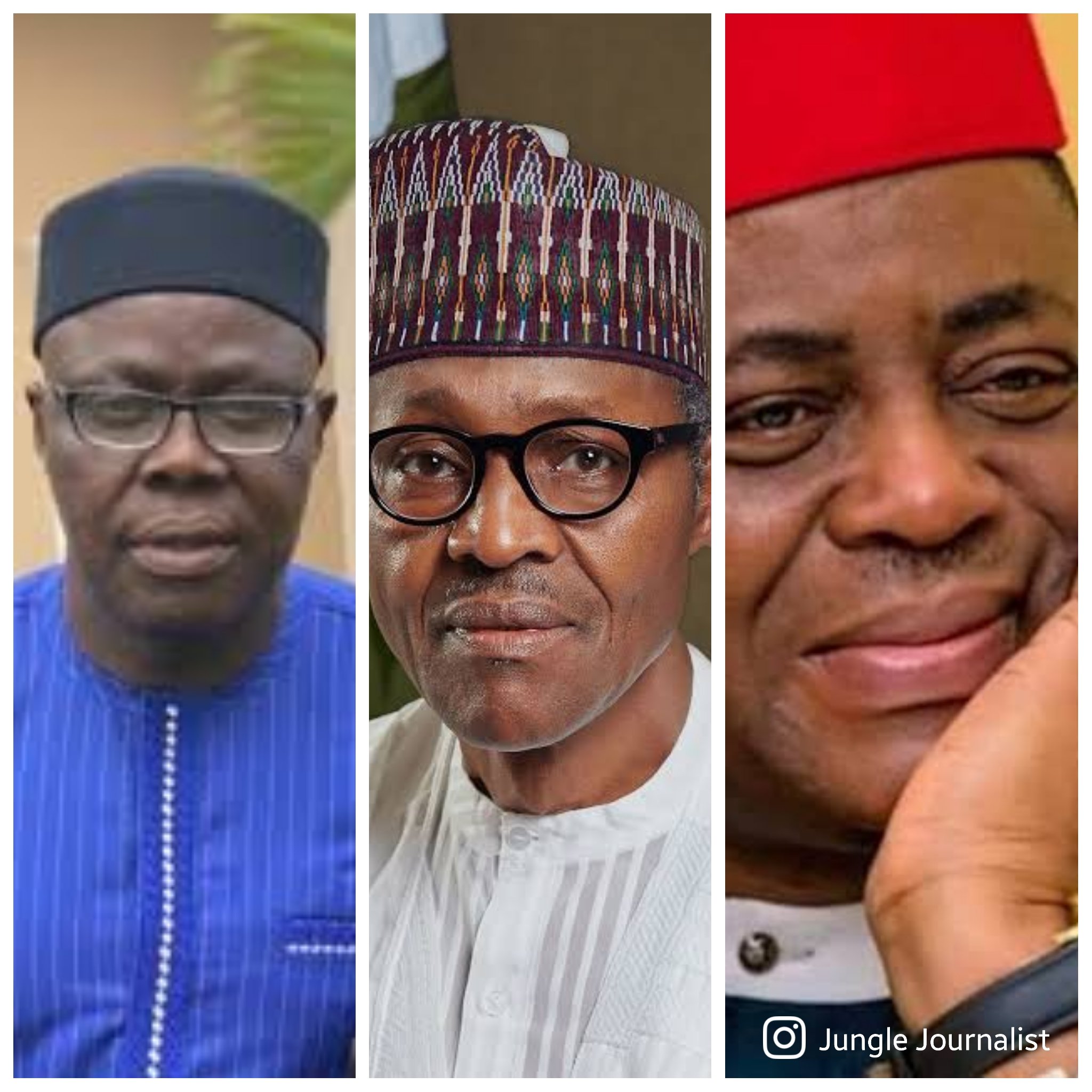 While one left a party that has failed its people woefully, the All Progressives Congress (APC), the other left the People’s Democratic Party (PDP) to return to the same APC. One man is a journalist, Senator Shehu Sani, who uses every chance he gets to criticize the ruling APC, his own party.

On the other hand, Fani-Kayode also criticizes the same APC whenever he gets a chance, but this has been his trade in stock for so many years now.

As has been made abundantly clear by his defection, Fani-Kayode is a very, very shameless man. This is a man who have no iota of honour or self-respect, the worst of all men.

He claims he was directed by God to join APC, and that he joined for national unity. Hear him, when Channels Television asked if he truly joined because of hunger “I find that very insulting whether it is coming from you or my critics, I am not the first person that would decamp to the APC, have you asked others this same question? If you ask all politicians this question, you will get the same answer; nobody knows tomorrow. I have my values and I will continue to work towards that.”

Famous for abuse of wives

Femi is a very cocky and overbearing man who has a history of beating his wife and even stripping them naked. For a couple of years now, it has been in the news.

Can a duck give birth to a monkey?

He is one of the younger sons of Fani Kayode. Fani Kayode was the Deputy Premier of the western region. If it was today, he would have been deputy governor. The fight between SL Akintola who was then the premier of the region, and the Deputy Chairman of the Action Group, Obafemi Awolowo’s party.

Awolowo chose to relinquish the premiership of the region so that he can contest and be the Prime Minister of Nigeria at independence in 1960. So he made his assistant, Akintola the premier. Fani Kayode’s father, also known as Fani Power was the Deputy to SL Akintola. Akintola then sold the Action Group to the Northern Peoples Congress (NPC) of Ahmadu Bello and Tafawa Balewa.

As a result of that, NPC took over the western region and declared a state of emergency after the elections of 1963, 64.

The election was won by Obafemi Awolowo’s party, Action Group, but the party that was now formed by SL Akintola and Femi’s father to form an alliance with NPC was declared the winners.

Fani-Kayode’s father was reported to have said that Awolowo’s Action Group might have won the election, but they will not be sworn in. So, although they lost the election, the losers were now sworn in, like what happened with Hope Uzodinma. So the Yoruba people went on rampage, and for almost 2 years, they were burning the whole western region. They called it ‘Operation Wetie’, meaning, operation wet it or wet them. So they were wetting people with petrol and setting them ablaze. Anyone supporting FFK’s father was all set ablaze in Ibadan, Akure, Ondo, Abeokuta. Lagos was not part of western Nigeria then, but was known as the Lagos capital territory.
The BBC did a documentary and called it the wild, wild west, to represent western Nigeria.

The Minister for Lagos then was Alhaji Musa Yaradua, the father of Shehu Musa Yaradua and Umaru Musa Yaradua. So, that went on from 1964 to 1965, so early morning of the second week of January 1966, after almost two years of war in the western region, Major Chukwuma Nzeogwu to overthrow the government. In fact, as a result of what happened then, the western region was shut out, and that was what led to the direct intervention of the military and those people were chased out of power.

An Edo proverb asks, can a duck give birth to a monkey?

So, Femi, since he came back to Nigeria from the UK after his studies, has been one problem to another. He was a minister as a young man, after being a special adviser to Obasanjo. He was thrown out by Obasanjo, but later came back to join Goodluck Jonathan, then he left and went to join Tinubu to form APC. Then he became the person fighting Jonathan. He was the one that used the word ‘clueless’ for Jonathan. When they refused to give him the position he wanted in APC, he came back to PDP to join Jonathan towards the end of Jonathan’s tenure, and together with Doyin Okupe, he became the Presidential spokesman.

He was the one in charge of most of the campaign for Jonathan. He was in PDP, went to ACN, went to APC, helped to form APC with Amaechi and Co. He left and joined PDP and came back again, then left for PDP. This is his third missionary journey to APC, and fourth time in PDP. He is the one that has been fighting Buhari, calling him all kind of names. In fact, he was the first person to go and visit Nnamdi Kanu, he has, in about four different occasions sworn never to go to APC. I have the videos. In one of them, he said he would rather die. I think it’s time for him to die.

While it’s expected that fellow APC members would welcome him with open arms into the party, even they are shocked that he would once again, give up his dignity as a human being and lick ass.

One of the most pained about Femi’s defection is Joe Igbokwe, who would rather insult his own kinsmen than say the truth about the failure of his party. He has since yesterday, been making post after post on. Facebook, condemning the defection of FFK.

Hear what he said a few hours after FFK met Buhari: ‘DESPITE ALL MY PUSH FOR APC, ABUJA HAS NOT GIVEN ME A PHONE CALL TALK-LESS OF INVITING ME for A COFFEE WITH C IN C BUT HERE IS A POLITICAL CHARLATAN AND PROSTITUTE BEING GIVEN A RED CARPET IN the SEAT OF POWER, ABUJA.’

In another post on Facebook, he said: “NOW THAT FFK WHO SAID THE PERSON IN ASO ROCK IS NOT PMB HAS GONE TO THE SAME SEAT OF POWER TO CONFIRM THAT PMB IS REAL, LET FAYOSE GO ALSO TO THE VILLA TO SPEAK THE TRUTH TO POWER IN ORDER TO REST THE CASE.’

He also said:” I PRAY THAT YOUR LOYALTY WILL NOT NOT BE TESTED AT A TIME LIKE THIS THE WAY MINE IS BEING TESTED AT THE MOMENT.”

Then, ““And they threw it on our faces as if we are nothing. If you guys don’t see it as an insult I do.”

The newly defected governor of Ebonyi State, Engineer Dave Umahi described FFK as a liar for telling Buhari that he was part of those who negotiated for him (Umahi) to join APC.

Hear him “How would somebody in the PDP be instrumental to my moving? A whole governor of the state. Not even a small governor, an experienced governor. He has to withdraw the statement. He was never part of any discussion of my movement. I moved South-East to the centre of administration. I moved to close the gap between the centre and South-East, which our forefathers like Nnamdi Azikiwe fought for.

“So for somebody to come and say that a whole chairman of South-East Governors Forum, he was instrumental to that, was an insult to my person and with all due respect, he has to withdraw the statement”.

Sheik Gumi, who has turned himself into a spokesman for the bandits and terrorists of the country was also shocked at the defection move of Fani-Kayode. He lambasted him almost immediately the news went into the air “He posted, “I have for long, neglected the rantings of the Judas of Oduduwa attacking me knowing fully well that he is fake and a traitor. Time has now caught up with him and thanks to Allah, all his vituperations are cast in the dustbin of merciless history. It is him now, one wonders which of the seven circles of hell this duper will settle if he doesn’t repent.”

Lest we forget, Femi Fani-Kayode has been constantly in the news since Buhari became president. We won’t bother going into details on what he said about Buhari, but we want you to take a look at a few headlines he made:

3. I am ashamed Kumuyi could shake and smile with a tyrant like Buhari – October 3, 2018

Let me conclude by saying this – a man who is not founded in honour is hollow and empty. Not recognizing the failure of President Muhammadu Buhari and his regime, not recognizing kidnapping and insecurity, and Boko Haram bastardly acting in the North, East and West, I have come to the conclusion that Fani-Kayode is completely finished.

Chief Patrick Osagie Eholor is the founding president of One Love Foundation. He is a human rights activist, and is popularly known as Ultimate Equals, the Democracy Observer-General of the Federal Republic of Nigeria.