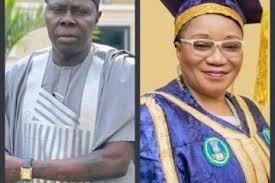 University of Benin, Benin City Nigeria has been dragged before a Benin High Court by popular social crusader, Chief Patrick Osagie Eholor over unpaid contract running into millions of naira.

Eholor, who is the Global President of One Love Foundation said he undertook the contract for the University when Prof. Faraday Orumwense was the Vice Chancellor of the institution years ago.

The social crusader had urged the Vice Chancellor to address the issues of sex for marks, poor electricity and water supply, sorting of courses, inadequate lecture halls, unhygienic hostel conditions and unnecessary interference with the leadership of the Students Union Government.

This, he said, would solve some of the challenges facing the famous citadel of learning in West Africa and beyond.

He said, I’m urging Prof. Salami, the Vice Chancellor of Uniben, to devote more funds made available to her to address some of the challenges facing the only federal university in Edo State. It is only through proper utilisation of funds that we can have adequate human capital and infrastructural development.

“Uniben has suffered from maladministration in the past. This must not be allowed to continue by the present Vice Chancellor, Prof. Lillian Salami.

“We urge the Vice Chancellor to ensure that Uniben under her administration tackle sex for marks, poor electricity and water supply, sorting of courses, inadequate lecture halls, unhygienic hostels and unnecessary interference with the leadership of the SUG, making it so inefficient and toothless”, he concluded.

But the Public Relations Officer of the University of Benin, Dr. (Mrs) Benedicta Ehanire had said the institution will not tolerate any attempt by any contractor, including Eholor to blackmail the institution.

She said in a statement dated Wednesday April 14, 2021 that Eholor had in a letter praised the Vice Chancellor in the past, but wondered why the sudden turn of event.

On why he sued Uniben over the unpaid contract, Eholor, who spoke with journalists on the telephone stated that Professor Salami was trying to be vindictive because of his last publication exposing the rot in the institution.

“The VC is trying to be vindictive because I spoke against what is happening in Uniben today. She is not happy because I told her to address the issues affecting Uniben like sex for marks, poor electricity and water supply, sorting of courses, inadequate lecture halls, unhygienic hostels and unnecessary interference with the leadership of the Students Union Government.

“The world should know what the Vice Chancellor is doing to contractors. A lot of contractors are in big debt today because they borrowed money to execute projects and yet the VC is refusing to pay them.

“It is wrong for people to play politics with everything including government institutions. The right thing the VC was supposed to do was to verify if the contract was fraudulently executed or not, as it is done in an ideal society.

“In this country, men and women are institution. In Canada and other western nations, people don’t act like institution; institution remains institution and that’s why their society is working.