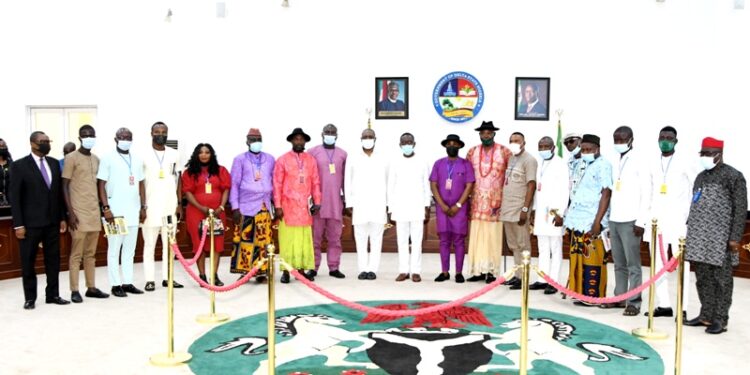 2
SHARES
19
VIEWS
Share on FacebookShare on TwitterShare on WhatsApp

Okowa disclosed this when he received the President and Members and Board of Trustees of the Isoko National Youths Assembly (INYA) at Government House, Asaba.

He congratulated the President on his successful election and commended the youths of Isoko nation for their partnership with government in ensuring peace and security in the area.

He stated that his administration couldn’t have achieved much without the peaceful atmosphere created by youths in the state.

“I congratulate you for your victory at the election. Am glad that the Isoko youths have carried themselves above board.

“At every point in time I have always believed in free and fair elections, where dialogue cannot produce a consensus candidate.

“Am glad that you have spoken so well about the issues that affects the Isoko nation and am happy that you are thinking in the direction of synergy with the state government in terms of training of Isoko youths in the area of skill acquisition and development.

“I encourage you to make sure that the 50 persons trained by your predecessor that you mentioned, are monitored to ensure that most of them remain in business.

“The greatest problem we suffered in the past was that, after training people and giving them starter packs, about 80 percent of them sell off these packs.

“We have been undertaking entrepreneurship programmes to make sure our youths are engaged and we have also monitored them closely.

“So we would have to sit down with you and see your proposal, so we can know where we can provide support as a government,” he said.

On the request for inclusion of Isoko youths into the Presidential Amnesty Programme, Okowa said “The idea behind the Amnesty programme was to train the youths to be either self employed or employed in the private sector to become self-reliant and I believe that the amnesty office should truly re-engineer the entrepreneurship programme.

“The payment of allowances without going through any training to become business owners of their own is not the original intentions for establishing the Amnesty programme.

“If many youths establish themselves they will take up more youths and the effect will pay off in the years to come in terms of reduction in unemployment,”

On conversion of Oleh campus to a Polytechnic, Okowa said his administration was not thinking in that direction as he was committed to ensuring full functionality of the newly created universities.

“We just recently upgraded three tertiary institutions to Universities and we are concentrating on making sure that they kick off smoothly.

“The universities will help solve the problems of lots of Deltans who go to any lent including out of the shores of this country just to get university education,” Okowa stated.

“I urge you to continue talking to our youths to stop taking arms against themselves. The elders don’t fight it is the youths that fight so the youths must rise up to ensure that this must stop.

“If we resolve as youths that we will not go in that direction it will not happen again. Its important we take this very seriously so that we can have lasting peace,” the governor stated.

Earlier, President of the Isoko National Youths Assembly Comrade Amos Etaluku had commended the governor for his developmental strides in Isoko nation and beyond.

He called for the partnership of the state government in the training of Isoko youths in various skill acquisitions in the oil and gas development.

He appealed to government for the completion of the electricity step down project in Ozoro and partner with INYA for the proposed Isoko Youth Peace and Security Summit.

“The exclusion of Isoko youths in the GMOU in Heritage Energy Oil Services is another bitter pill that is difficult to swallow,” he stated.

Chairman Board of Trustees of the Isoko National Youths Assembly Comrade Morista Idibra, had commended the governor for the upgrade of the Delta State Polytechnic Ozoro to University of Science and Technology.