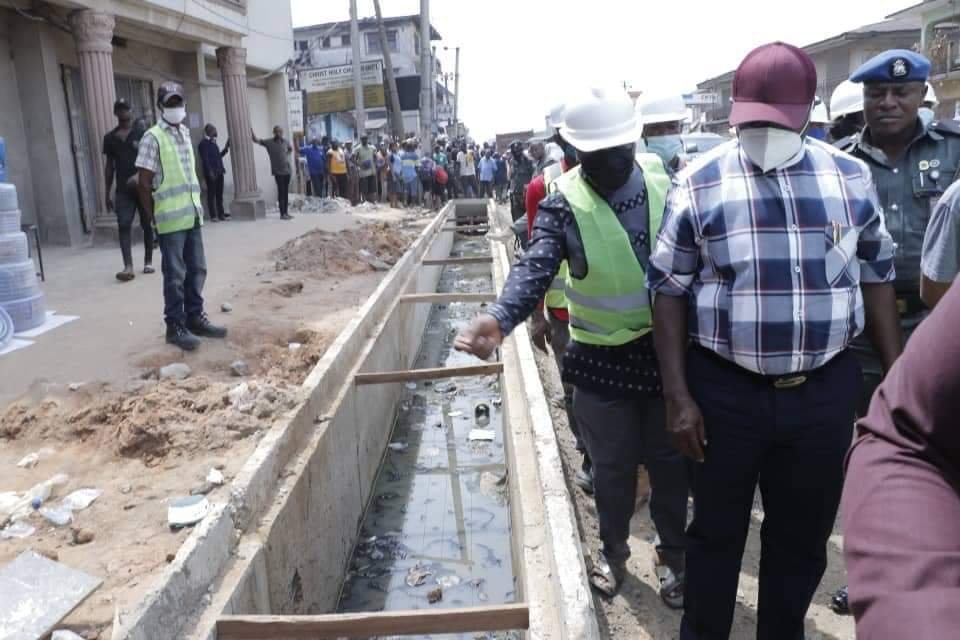 1. In the 80s, then Governor of Imo State (which includes present day Abia, Imo and parts of Ebonyi States) visited Ndiegoro area of Aba which was wrecked by a flood disaster and wept profusely in public because of the suffering of the people and the inability of the Shagari administration of the then federal government to decisively intervene to help the state fix the challenge.

3. After his inauguration in 2015, Governor Okezie Ikpeazu moved to holistically solve the perennial flood challenges in the area which also doubles as the fabrication and tailoring hub of the city and produces more than 40% of the GDP of Aba. He believed that reconstructing the major roads alone without properly channeling storm water will continue to be a disservice to the people as it will only be a matter of time before flood water washes off the new road.

4. Series of meetings were held between the Governor and government of Abia State and the World Bank team to first ensure that the state complies with the requirements of transparency in government financial management systems vis-à-vis the open government initiative of the World Bank.

5. With the world bank finally confirming that the government was in compliance with relevant requirements of transparency, the next challenge was to appropriately situate the project within existing World Bank funding projects in the country.

6. It is important to note that before the intervention by Governor Ikpeazu, Nigeria Erosion and Watershed Management Project (NEWMAP) was only focused on erosion mediation projects but the Ikpeazu team managed to convince the World Bank to use the same vehicle to intervene in a flood mediation project which was new to the scope of the agency.

7. Finally, the world bank approved the N27.4b “Aba Emergency Flood Mitigation Works for Uratta and Umuagbai Flood Plains” which is to date their biggest singular intervention in Nigeria with the following scope of work:

b. Full reconstruction of Obohia and Ngwa Roads

c. Reconstruction of parts of Uratta and Port Harcourt Roads within the project area.

8. Surprisingly, the approval got Abia opposition politicians very angry and apparently jittery that if the project was implemented it would be near impossible for them to defeat Governor Okezie Ikpeazu at the 2019 polls. The defeated All Provressive Grand Alliance (APGA) candidate in the 2015 election, Dr Alex Chioma Otti, led the charge to cancel the approval and project by petitioning and visiting the Federal Ministry of Finace and even members of the National Assembly. He pressed for cancellation of the project without consideration for the negative implications for the people of the state and Aba South residents such cancellation would bring.

9. It took all the leadership dexterity of Governor Ikpeazu to overcome all the booby traps placed on the path of the project by Otti and other Abia opposition politicians as well as some envious opposition controlled states leading to many months of project implementation time being lost. Indeed, time was of the essence because World Bank funding of NEWMAP projects had a time line after which they would end all related interventions in Nigeria.

10. While all these sabotage were going on, Governor Ikpeazu, knowing how crucial Port Harcourt Road, Aba, which is a federal road within the city, is to the people and economy of the city, moved to commence reconstruction of the road while waiting for the final decision to be made by the World Bank. He expanded the road into a six lane project, constructed the surface drains that will channel storm water to Waterside River and evacuated the mounds of refuse at the Crystal Park Junction of the road.

11. Then the long awaited signal came from World Bank that the emergency flood mitigation project would go ahead. Worthy of note is that within the waiting period, APGA went to town to claim that they had “attracted” projects to reconstruct Uratta and Ohanku Roads from the federal government. I invite the good people of Aba to visit both roads and see the state of those two roads which the same opposition elements have recently been taking videos of to circulate online as evidence of failure, an exercise which has ended in futility for them as Governor Okezie Ikpeazu remains focused on delivering the projects within stipulated timeline as agreed with the World Bank