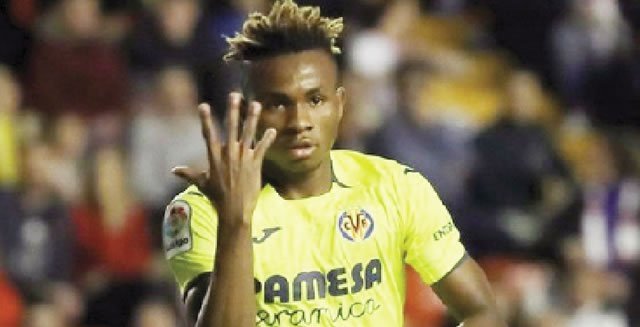 Super Eagles winger Samuel Chukwueze has been rated the second most expensive African player in LaLiga, despite being out of action since May.

The 22-year-old winger, who came through the ranks at Diamond Academy in Nigeria before joining Villarreal in 2017, made his first-team debut for the Yellow Submarine in 2018 and has racked up 119 appearances, scoring 17 goals and assisting 17 more.

In the latest update of players’ valuation on Transfermarkt, the Nigeria international’s market value dropped from €30m to €20m to place second behind Moroccan striker Youssef En-Nesyri whose value rose to €40m.

En-Nesyri has scored three times and made one assist in six appearances for Sevilla in LaLiga this term.

Chukwueze has same financial value as Serge Aurier, who joined the Yellow Submarines on a free on Monday.

The Ivory Coast international has a release clause of €20m in his new deal.

Geoffrey Kondogbia and Oussama Idrissi are the other African players valued at €15m and €8m respectively.

#ENDSARS: I will apologise, dialogue with Nigerian youths if elected president – they were badly treated—Peter Obi