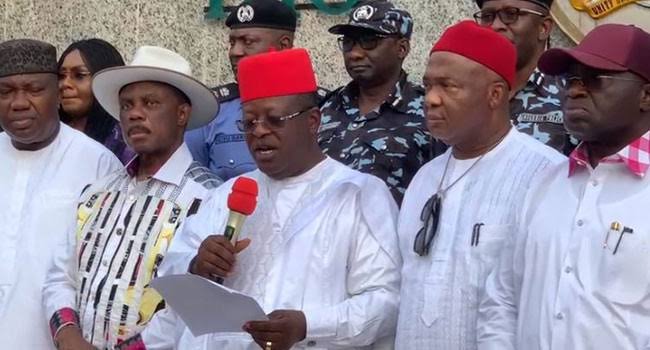 Governors of the South-East on Tuesday berated the Indigenous People of Biafra (IPOB) sit-at-home directive and killings in the region.

They resolved that the directive which had crippled social and economic activities in the region can no longer be sustained especially since many members of the group behind the order live abroad.

In a communiqué issued at the end of their meeting held in Enugu and read out to journalists by the Chairman of the South-East Governors Forum, Dave Umahi, the governors vowed to do every possible to stop the sit-at-home in the region.

Traditional rulers and some selected leaders from the South-East were also at the meeting held at the Enugu State Government House.

However, the South-East leaders were silent on the IPOB leader, Nnamdi Kanu, who is standing trial for alleged treason at the Federal High Court, Abuja.

The group had in August ordered a sit-at-home in the region to protest the continued detention of Kanu.

But the directive has been hijacked by criminal groups wreaking havoc in the five states in the South-East, especially in Anambra.

The communiqué read: “The South-East condemned the killings in the region and have agreed to join hands with security agencies to stop the killings.

“The meeting condemned the sit-at-home orders, which are mostly issued by our people in Diaspora who do not feel the pains.

“In view of the information that even IPOB had cancelled the sit-at-home, the meeting resolved that governors and all people of the South-East do everything within the law to ensure that there is no further sit-at-home in the region and that people are allowed to freely move about in the zone.”