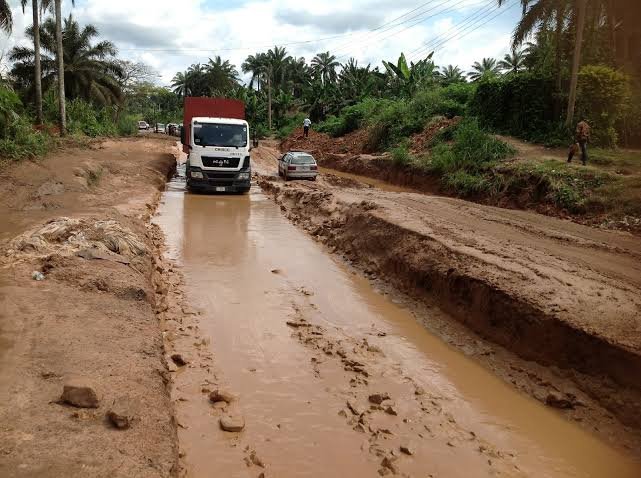 Early last week, Governor Okezie Ikpeazu invited the State’s Commisioner for Works, Elder Bob Ogu, to a meeting in his office and directed him to mobilize a contractor to immediately execute palliative repairs of failed portions of Umuahia-Ikot Ekpene Road, Umuahia, after receiving reports on the terrible state of the federal road leading to the prestigious Michael Okpara University of Agriculture, Umudike (MOUAU), and the attendant hardship experienced by commuters who use the road that also links our state to some neighboring states.

After assessing the work to be done there, the Honorable Commissioner reverted to the Governor last Friday and informed him that they would have to get written permission from the Federal Ministry of Works before commencing work as the said road has already been awarded by the federal government and handed over to the contractors who are claiming that adequate funds have not yer been provided for commencement of the work.

At that point, the Governor was really furious and asked: “is there a deliberate plan to totally destroy trade and commerce in this state and punish our people?” He recalled that the federal government also awarded Aba-Ikot Ekpene Highway since 2017 and could not do any effective work on it for so long up to this year to the extent that the state government had to commence reconstruction of the road from Opobo Junction, Aba, area using rigid pavement (cement) technology.

Okiyi Kalu moved to Ministry of Trade, as Ikpeazu swears in new commissioners

Aside from Aba-Ikot Ekpene and Umuahia-Ikot Ekpene Federal Highways that are in terrible conditions, other federal roads leading to our major commercial and agricultural hubs such as Abe-Port Harcourt Segment of the Enugu-Port Harcourt Highway, Umuahia-Uzuakoli-Ohafia Road, Arochukwu-Ohafia-Bende Road etc, are death traps that cannot, by any standard, be described as roads.

The most painful part is that these are the major roads leading to our centres of trade, commerce and agricuiture, the mainstay of our people. Indeed, visitors to our state form opinions about the state based on the poor state of these federal roads and until they are fixed it will remain difficult to appreciate the work the Ikpeazu-led administration has done to renew our infrastructure since 2015.

Abia State Government moved to fix the Osisioma-NNPC Depot Road in Aba, belonging to the federal government, two years ago and after working on more than 1km of the road the federal ministry of works sent a letter directing the Abia State government to leave the federal road which they claimed to have been awarded for reconstruction. Two years down the line, absolutely nothing has been done as the federal contractor claims he is yet to be funded. Our appeal to allow us to fix the key road for a future refund fell on deaf ears.

Yesterday, Governor Ikpeazu received information that an articulated truck fell along the bad portion of Umuahia-Ikot Ekpene federal road killing a student of Michael Okpara University of Agriculture, Umudike, identified as Queen. He has directed the state ministry of works to mobilize Pumeco Construction Company to move in and implement palliative repairs along the bad portions of that important road from Wednesday with or without approval from federal ministry of works.

In addition, the Governor expresses his personal condolences and that of the good people of Abia State to the bereaved family, students and staff of the university over the sad and unfortunate incident.

Abia state Government is in solidarity with the students who protested earlier today and wishes to assure them that help is on the way. Aside from the palliative work we are commencing this Wednesday, we will engage the federal ministry of works on the need to fund road projects in our state or allow us to work on those roads already tied with federal contracts.

For now, we are moving in and hope to do more for our people as the rains abate.