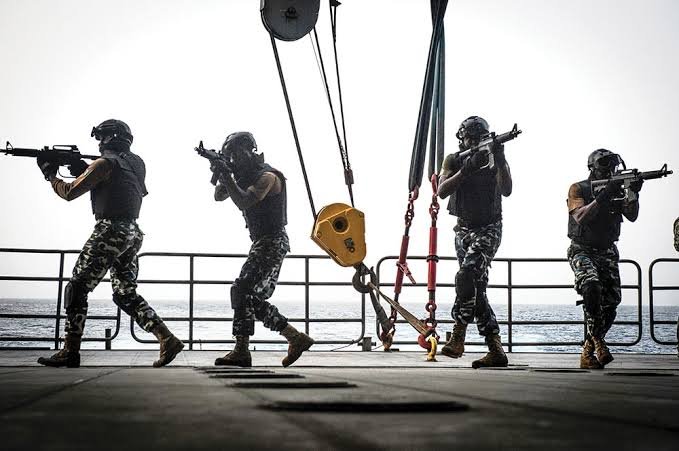 It was a bloody Saturday for some gunmen in Anambra State as men of the Nigerian Navy stationed at Navy Junction, Awkuzu junction, neutralised them in a gun duel.

The gunmen, travelling in a red Toyota Highlander SUV, with registration number NSH 248 AE, according to the video recording of the incident, were all allegedly killed in the gun duel.

The video shows the interior of the SUV with blood spattered, indicating that all the occupants were shot, as depicted by the blood clots on the foot mats.

The video equally shows the Naval officers inspecting the car, just as one of the narrators displayed the head wear of the occupants with the inscription, “vigilante” and a red knotted bandana, believed to be an amulet.

A source in the area, who claimed he witnessed the incident, alleged that the gunmen came as usual to attack the Naval Officers on duty, but they were overpowered by the gallant officers.

According to the source, “we give God the glory. Our Nigerian Navy has done a marvelous work to save us from this wicked people today. The gunmen started shooting sporadically to scare people in the area away to enable them carry out their devilish act, but as God may have it, they were neutralised and shot by the officers.

“We are happy with the development. It is a lesson for anyone planning such thing again. We call on the state governor, Willie Obiano to as a matter of urgency, double equip them, if possible, reward the officers to motivate them,” the source pleaded.

The State Police Public Relations Officer, DSP Ikenga Tochukwu, when contacted, said his was yet to receive the information, but promised to call back, as soon as he got the details.