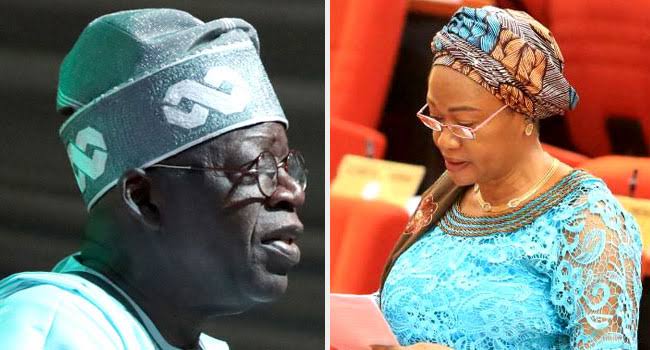 Last week, Senator Remi Tinubu was captured on video, verbally assaulting a citizen of her Senatorial Zone, who probably voted her into office.

In the video, a lady who was identified as Arinola Oloko tried to find her way into the hall where a public hearing on Constitutional Reform was called a thug by Senator Remi Tinubu. While the lady protested, Tinubu insisted that she is a thug, despite protestations from the public.

She also refused to apologise to the lady whom she clearly offended, in her capacity as a Senator, representing a people.
In the ongoing constitutional review hearings, Tinubu is the Senate Committee Chair for South West, so it’s actually a shock coming from not just a Senator, but one who is supposed to listen to the aggrieved people of her Constituency to review the constitution.

It is a shame that Mrs Tinubu, whose husband, a former state governor, runs a political career with the use of thugs describe a fellow woman as a thug! You are calling a respectable lady a thug. Yet, MC Oluomo has been with your husband for many years as the chief security officer to your husband and is a well known, proud thug. Yet you are calling another woman a thug.

There are many many issues troubling Nigeria at the moment, and Senators like Remi Tinubu would rather look down on the electorate than propose bills that will be beneficial to the people.

But unfortunately, the only bill she can be remembered for at the Senate is that proposing the ban of bleaching creams. Can we be serious for once in this country? We are not concerned about bleaching creams, but with more important issues. Discuss the minimum wage, for teachers, for nurses, electricity and many other issues. Issues like open grazing, banditry, herdsmen menace will move our country forward.

OK, just look at Bola Ahmed Tinubu who claims to be a leader in Yoruba Nation but cannot fix his house. Your wife has been there for many years, and she has not been able to pass one single bill. The first bill that she tried to pass died on arrival. It was bleaching cream. How dare you want to make bills about bleaching cream?

Our representatives should show us more respect. How can your husband be using thugs to terrorise people and hijack votes and you have the effontry to call another woman a thug?

It is now or never. We are going to free ourselves from the shackles of this oppression. From this so called political bandits who have enslaved us due to British amalgamation.

Mr Tinubu, face your house and talk to Remi. We are not going to tolerate her utterances., or yours. Don’t believe that because you have political power, you are covered.

With the kind of behavior Mrs Remi put up, just forget about your plans to become president in this country. We cannot continue to tolerate nonsense and vote in those who opresss us instead of build our country.

If you arrest one, you arrest all. If you kill one, you kill all. It is now or never. Nigeria must be free. We either live free or we die.