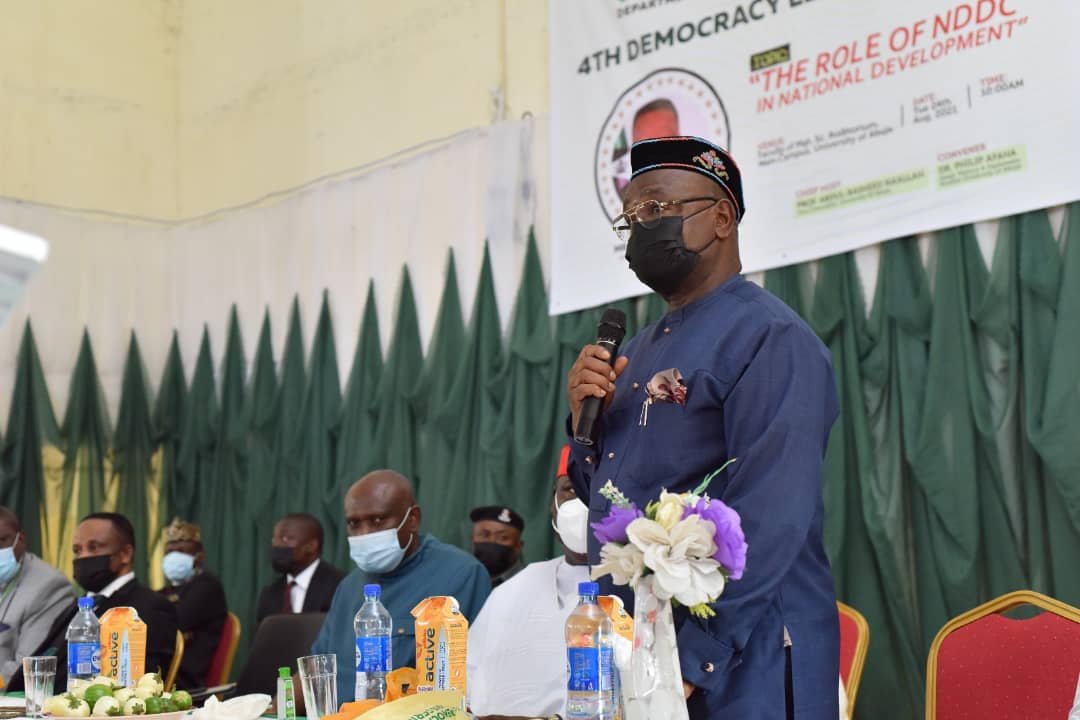 The Interim Administrator of Niger Delta Development Commission, NDDC, Mr. Efiong Akwa has said that he led management team of the commission on a visit to governors of the region as part of its averred commitment to foster peace and stronger relationship between the commission and the nine state governors in the oil rich part of the country.

Mr. Akwa stated this while delivering a lecture on the Role of Niger Delta Development Commission, NDDC in National Development during the 4th Democracy Lecture Series at the University of Abuja last Tuesday.

The NDDC Interim Administrator noted that the visit afforded his management team the opportunity to liaise with the governors of the region on the areas of collaboration as well as the development of Niger Delta, adding.

Mr. Akwa however told the gathering that his team has so far visited Rivers, Akwa Ibom, Ondo, Imo and Delta, saying that the various governors took time to eulogize the management of NDDC for changing narratives.

In his words, “When we came on board, we thought it necessary to visit State Governors in the Niger Delta States to acquaint them with the current realities of NDDC. When we visited Rivers State Governor, Nyesom Wike, he commended us for the vision and pledged his readiness to work with us. He made commendable statements about the current leadership of NDDC.

“When we also visited Akwa Ibom State Governor, Deacon Udom Gabriel Emmanuel, he toed the line of appreciation and also said appreciable words about the current leadership in NDDC. Other governors also did same when we visited them, but the truth is that we now have a good relationship with the governors in the region.

“NDDC’s master plan has since expired. For a long time now, NDDC was not operating according to its master plan. This is because State Governors were not moving in the same developmental pattern with the commission, and you cannot blame them because they cannot be part of what they were not drafted in originally. The Governors were not carried along when the NDDC Master plan was drafted, that’s why you normally hear of clash of interest in project execution in some states, which also necessitated our desire to get in touch with them to know the areas NDDC can step in,” he said.

Earlier in his remarks, the Vice Chancellor, University of Abuja, Professor Abdul-Rasheed Na’allah noted that issues of development are vital to the survival and competitiveness of Nigeria. He wondered why development has been difficult to the country, saying that a greater part of Nigeria today still complains of unavailability of portable drinking water and other basic amenities, noting with the huge resources, the country cannot showcase anything tangible as a nation.

Professor Na’Allah further stated that the creation of NDDC was fundamental strategy to move Nigeria forward, and called on the various stakeholders to join hands in developing the region, which he said will in turn development Nigeria with a view to national unity.

“Nigeria came together as a great state, but it never stopped. We talked about pre-colonial, we are now talking about post-colonial. But the post-colonial was not an easy one for Nigeria. Some people have even stopped calling it post-colonial. But there were so many names that we called it; post imperialism. But was it really post-colonial? Why is it that development has been very difficult for this nation? Why is it that some part of Nigeria today can say we do not have drinking water? Why is it that the part of this Nigeria that is producing the resources for this nation cannot showcase anything, in terms of development? Why is it that we’ve tried all kinds of formula to develop this country, we even went to war? Why is that matters that made us to war are still the same matters that are showing their faces today? What are the sacrifices?

“The creation of NDDC was a fundamental as a part of sacrifice to move Nigeria forward. How has this agency assisted in helping in addressing development matters in this country? What is the relevant of NDDC to the survival of this country? What has it done? Why is that today, we now have more questions than answers? Is that we don’t have resources to develop this country? Is it human resources that is our problem?

“University such as this, just like we are is a model university in Nigeria by destiny of location. I say this every day, if President Muhammadu Buhari is the number one citizen in Nigeria, University of Abuja is the number one university in Nigeria. And this is one of the reasons today that we’ve brought great personalities; people who are thinkers of the society; leaders in the society, especially, the guest lecturer for today, Mr. Efiong Akwa to come and present his thoughts regarding NDDC and development of Nigeria,” Prof. Na’Allah said.

The Minister of Niger Delta Affairs, Senator Godswill Obot Akpabio, who was represented at the event by his Chief of Staff, Sir Etekamba Umoren thanked President Muhammadu Buhari for being committed to the yearnings of Niger Deltans, saying that the recent commissioning of the NDDC headquarters and other life-touching projects are testaments of the fact that President Buhari is committed to the development of the region.

Highpoint of the event was the presentation of awards to deserving personalities, including the NDDC Interim Administrator, Mr. Effiong Akwa.