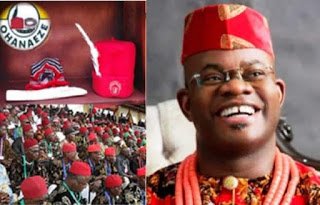 The apex decision-making body of the Igbo people, Ohaneze ndi Igbo has replied Kogi State Governor Yayaha Bello who recently stated that there is nothing like rotational Presidency.

The organisation described Bello as a kid who was still in secondary school when the decision was reached.

Below is an extract from a Press Statement from Ohanaeze Ndigbo:

“Governor Bello was still a student, studying Accountancy at the Ahmadu Bello University (ABU), Zaria when an agreement was reached between the North and the South with respect to Rotational Presidency.

“The meeting was held at the National University Commission Conference Centre, Abuja in 1998. Dr. Chuba Okadigbo spoke on behalf of the South while Alh. Abubakar Rimi spoke for the North. The likes of Dr. Alex Ekwueme, Chief Solomon Lar, Dr. Okwesilieze Nwodo, etc were at the meeting.

“The Nigerian statesmen examined the merits and demerits of zoning and rotation of power between the composite zones in Nigeria. In the end, it was resolved that the presidency be conceded to the South and that it would rotate between the South and the North in the interest of equity, unity and corporate existence of Nigeria.”

“The foregoing was the basis for the emergence of presidential candidates of the mainstream political parties from the South West in1999. Since then, the patriotic and peace-loving Nigerians have adhered to the rotation principle such that at the end of Chief Olusegun Obasanjo’s second tenure, President Musa Yar’Adua was elected; Goodluck Jonathan and then President Muhammadu Buhari.”

“It was on that basis that the Southern Governors resolved in the Lagos meeting that the South should produce the next President of Nigeria after the reign of President Muhammadu Buhari.”