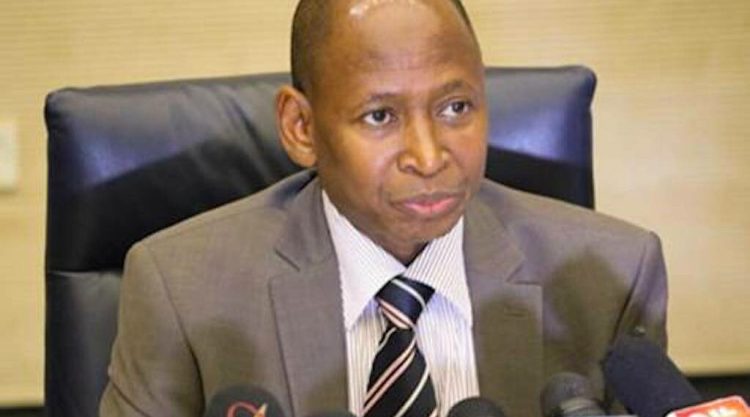 The Federal Capital Territory (FCT) High Court in Maitama, Abuja, on Friday, ordered the remand of a former Accountant-General of the Federation, Ahmed Idris, over alleged N109 billion fraud charges.

This was after the Economic and Financial Crimes Commission (EFCC), arraigned Mr Idris alongside three others – Godfrey Olusegun Akindele, Mohammed Usman and Gezawa Commodity Market and Exchange Limited.

They all pleaded not guilty to the 14 charges when read to them during the hearing before the trial judge, O A. Adeyemi-Ajayi.

Earlier before the defendants took their plea, the prosecuting lawyer, Rotimi Jacobs, a Senior Advocate of Nigeria (SAN), asked the judge to grant the prosecution leave to prefer a criminal charge under section 109 of the Administration of Criminal Justice Act (2015) (ACJA) against them.

Acct Gen of the Federation, Ibrahim Magu promotion, and how Buhari has unleashed corruption against Nigerians

The judge, Ms Adeyemi-Ajayi, granted the application as prayed by the prosecution.

Then a court official read out the 14 counts, which the defendants denied.
Request for bail

After the pleas of the defendants were taken, Mr Idris’ lawyer, Chris Uche, also a senior advocate, made an oral application for the bail of his client.

However, Mr Jacobs opposed oral bail application, insisting that it must be done in writing.

But Mr Uche pleaded for the release of his client pending the filing of a written application for his bail.

He urged the court to consider that the defendants had been on administrative bail granted him by the EFCC.

“Since there is no complaint that they have breached any of the conditions, they should be allowed to continue on that bail,” Mr Uche said.

In a ruling, the judge held that “the court is not a puppet to dance to the rhythm of public opinion.

“In the interest of justice for all, they are remanded in prison custody,” Ms Adeyemi-Ajayi said.

The suit was adjourned until July 27 for the hearing of the defendants bail application.
Backstory

In May, Mr Idris was apprehended in Kano, following his refusal to honour EFCC’s invitation concerning alleged fraud investigation.

Subsequently, the Minister of Finance, Zainab Ahmed, informed Mr Idris of his suspension, in a letter dated May 18.

His suspension is without pay, Mrs Ahmed’s letter stated.

The suspension, Mrs Ahmed said, was in line with Public Service Rules to give room for proper and unhindered investigation.

Count one of the charges filed against Mr Idris and others reads, “That you, Ahmed Idris, between February and December, 2021 at Abuja, in the Abuja Judicial Division of the High Court of the Federal Capital Territory, being a public servant by virtue of your position as the Accountant General of the Federation, accepted from Olusegun Akindele, a gratification in the aggregate sum of N15,136,221,921.46 ( Fifteen Billion, One Hundred and Thirty Six Million, Two Hundred and Twenty One Thousand, Nine Hundred and Twenty One Naira and Forty Six Kobo), which sum was converted to the United States Dollars by the said Olusegun Akindele and which sum did not form part of your lawful remuneration but as a motive for accelerating the payment of 13% derivation to the nine (9) oil producing States in the Federation, through the office of the Accountant General of the Federation, and you, thereby, committed an offence contrary to Section 155 of the Penal Code Act Cap 532 Laws of the Federation of Nigeria 1990 and punishable under the same section”.

Count eight reads, “That you, Ahmed Idris, while being the Accountant General of the Federation, and Godfrey Olusegun Akindele, while being the Technical Assistant to the Accountant General of the Federation, between February and November 2021, at Abuja, in the Abuja Judicial Division of the High Court of the Federal Capital Territory, in such capacity, entrusted with a certain property, to wit: N84,390,000,000(Eighty-Four Billion, Three Hundred and Ninety Million Naira) committed criminal breach of trust in respect of the said property when you dishonestly received the said sum from the Federal Government of Nigeria through Godfrey Olusegun Akindele trading under the name and style of Olusegun Akindele & Co., and you thereby committed an offence punishable under Section 315 of the Penal Code Act Cap 532 Laws of the Federation of Nigeria 1990.”

Nigeria's presidential election may end with a runoff over Obi, Kwankwaso's emergence - US institutes