The complainant in the alleged four hundred and thirty million (N430m) Tansian University internal roads contract fraud has petitioned the Turkey Consulate in Nigeria, Ambassador Hidayet Bayraktar, narrating his company, Leocem Investment And Development Ltd Executed Projects worth hundreds of millions for Tansian University road networks and the road leading to the founder of Tansian University’s house in Uga, Anambra State since 2016 which turned out to be fraud.

According to the petition dated June 24, 2021and addressed to the Ambassador of Turkey in Nigeria, the counsel to Cemhan Cuk, Lexsquires (Legal Practitioners & Consulants), “apparently, to perfect the scam, the University stressed the urgency of the road for its accreditation and licensing by the NUC and to positively change the aesthetic value of Tansian University. It was after the due and excellent execution and certification of the whole contracts that our client discovered that the whole scheme has been a scam from the very beginning.”=

A copy of the petition which was obtained on Monday, September 6,2021 in Abuja was titled: Petition Against The Management Of Tansian Univesity, Umunya, Anambra State For Corruption, Criminal Breach Of Trust, Unlawful Enrichment, Conversation Of Over N430,000,000 And Obtaining By False Pretenses Perpetrated Against A Turkish National, Engr Cemhan Cucuk.

The petition read in parts:

“Sometime in 2015, our Client was lured into executing multiple road network contracts at Tansian University, Umunaya in Oyi Local Government Area of Anambra State of Nigeria by the management of the University at contract sum of over four hundred and thirty million naira (N430,000,000) only.

“When the offer of the contract was introduced, it consisted of more than just a simple business opportunity for our Client, as there were follow-up letters and supporting documentation to convince our unsuspecting client that the contract is genuine.

“After our client had completed the construction of the internal roads of the University with asphalt, concrete culverts, water drainages, walkways, dual carriageway, as well as the link roads to the Chancellor/Founder of Tansian University at the cost of N430,000 (four hundred thirty million only), the University management has remained deceptive and unwilling to fulfil its obligation of paying for the services rendered by our client.

“Though the University, in her many deceitful and mocked correspondences to our client, confirmed and acknowledged its indebtedness to our client in the sum of NGN 430,000 (four hundred thirty million only) and gave assurance that it would be committed to making the payment. Unfortunately, all the promises including the partial payment into the account of our client were never kept.

“In one of its fraudulent moves, the University issued our client with Access Bank part payment cheque of One Hundred Million Naira (100,000,000 only) to be withdrawn on 31 January 2020, however, upon presentation on the instruction of Tansian, the cheque bounced (Dud)and was marked “DAR”, (Drawer’s Attention Required) by the bank. (See the attached Cheque) 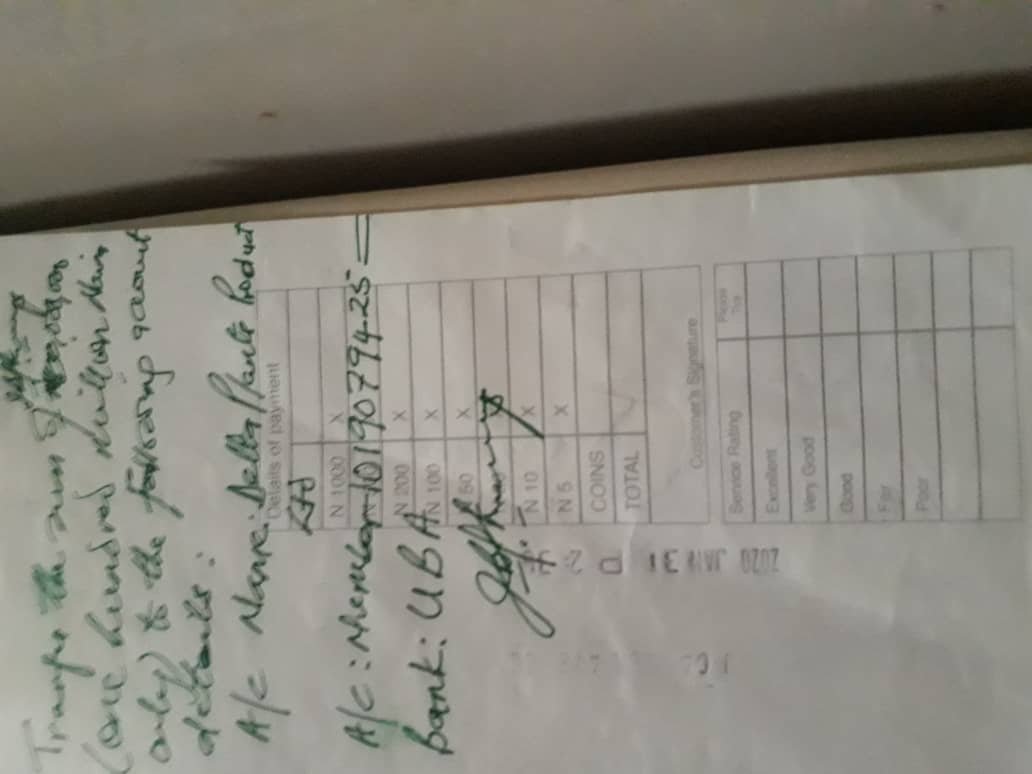 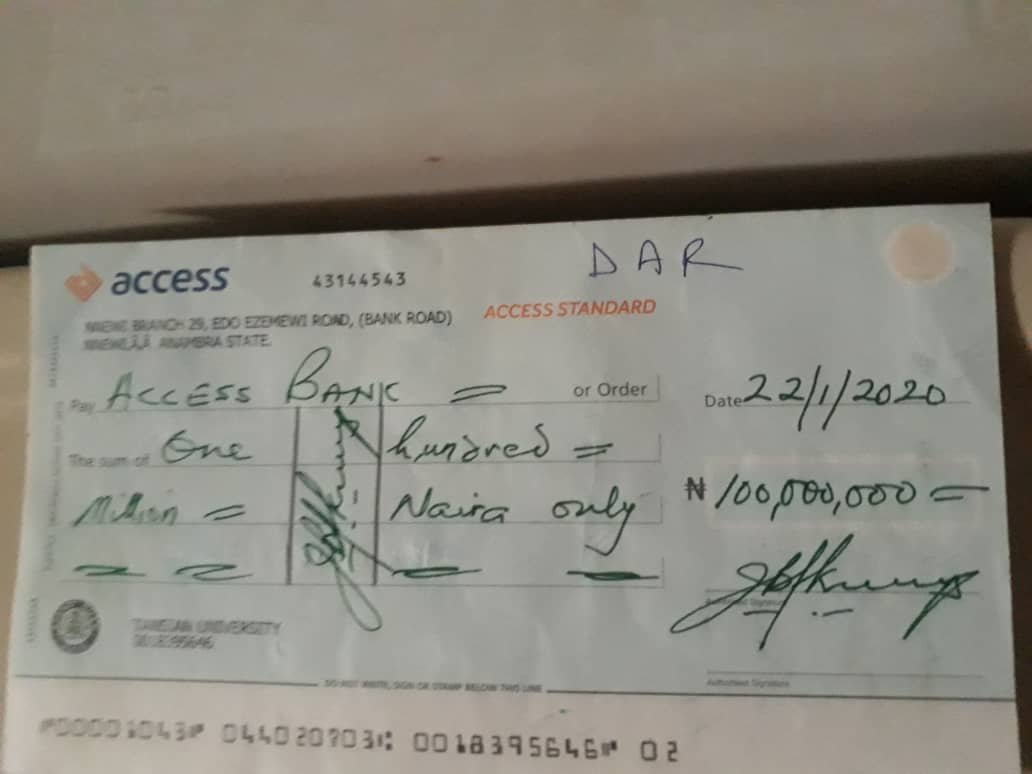 Five years after the completion of the project, the management of the university has continued to play hide and seek game. By their action, the management of the University made it overwhelmingly clear that ab initio, they intended not to pay any dime for the projects rather the sham contract, fraudulent misrepresentation and false pretences predicated thereon were ploys to lure the contractor to spend his hard earned money on the school projects. The university has simply corruptly enriched itself under a fraudulent cover of funding the contract for construction of infrastructure in the University as well as the road leading to the village of one the affiliate institutions.

“Between 2015 and 2021, our client still owes banks, vendors and individuals he borrowed money from to fund the contracts. Our client has appealed in writing and words to the University to pay up to enable his liquidation of loans obligations to the bank, yet the University is slippery and keeps avoiding him.

“The bank from where our client accessed facility to fund the project has threatened to recommend our client’s company to the Central Bank of Nigeria (CBN) for stiffer sanctions which will impact negatively on the creditworthiness of our client’s company for future loan transactions in Nigeria.

“The continued outstanding of this indebtedness may lead to its classification by the CBN. Where this happens, our clients’ company may be blacklisted with the consequent placing a banks’ loans restriction on the company.

“Because of the debt liabilities and obligations to other several vendors who are owed for about 5 years now, our client’s company is under pressure as some of the vendors are threatening to sue our client and his company, all because of the complicity and fraudulent activities of Tansian University.

“Our client was not only defrauded, but has lost his career integrity, and as well suffered the destruction of the reputation and integrity of his company, especially with its international partners.

“We are of the strong view that the actions of the management of Tansian University in the circumstances stated above clearly constitute criminal offences of Fraudulent Misrepresentation, Corrupt Enrichment, Fraud, Obtaining by False Pretence, Issuance of Dud Cheque among other related offences punishable under the laws of the Federal Republic of Nigeria. It also runs foul of the Education (National Minimum Standards and Establishment of Institutions) Act, Cap E2, LFN 2004 under which Tansian University was licensed and being regulated.

“Though, our client have written to the Nigeria’s Economic and Financial Crimes Commission (EFCC) in respect of the above subject matter, however, our client, as a Turkish resident in Nigeria, wish to further bring same to your attention. Our client implores you to use your good offices to champion his cause at the diplomatic circle and engage relevant Nigerian authorities to see that our client does not completely loose his NGN 430,000 (four hundred thirty million only).

“While counting on your quick intervention; please accept the assurances of our highest esteem.”

Efforts made by our correspondent to speak to the Public Relations Officer of the University, Mr Chidi Okorie proved abortive, as he said he was not in the position to speak on the matter.