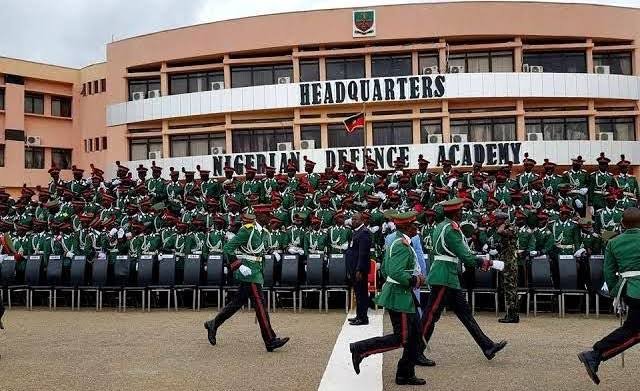 Gunmen suspected to be terrorists have attacked the permanent site of the Nigerian Defence Academy in Kaduna State.

The terrorists killed two officers believed to have the rank of majors, and abducted one other officer.

It was gathered that the terrorists disguised in military uniform to gain access into the security gates of the NDA.

A source told Channels TV that the terrorists who were in a vehicle then proceeded to the officers quarters in the early hours of Tuesday morning.

The gunmen opened fire killing a Major and a Squadron Leader and later on abducted another Major at the officers quarters.

According to the source, the bandits escaped through a nearby bush inside the academy.

The sound of the gunfire, however, alerted the troops of the NDA Quick Response Team, who arrived at the scene.

They were unable to rescue the kidnapped officer as the bandits were already gone with the victim.

It was also gathered that security operatives are now conducting a search and rescue operations to apprehend the bandits and free the military officer.

The spokesperson of the NDA, Major Bashir Muhammad Jajira who confirmed the development in a statement said the unidentified gunmen breached the NDA security and gained access to its residential area.

He also confirmed that two officers were killed while one other was abducted by the terrorists.

According to him, the cadets in the academy are safe while a manhunt has been launched to track the hoodlums and recover the abducted officer.

The full text of the statement reads: “The security architecture of the Nigerian Defence Academy was compromised early this morning by unknown gunmen who gained access into the residential area within the Academy in Afaka.”

“During the unfortunate incident, we lost two personnel and one was abducted.”

“The Academy in collaboration with the 1Division Nigerian Army and Air Training Command as well as other security agencies in Kaduna State has since commenced pursuit of the unknown gunmen within the general area with a view to tracking them and rescue the abducted personnel.

“The NDA community and Cadets are safe in the Academy. We assure the general public that these unknown gunmen would soon be apprehended and the abducted personnel rescued.”

The former lawmaker who lamented that nowhere is safe again in Nigeria recalled how the same terrorists previously attacked the Airport staff quarters and the Federal College of Forestry mechanization, all within the same axis in Kaduna State.