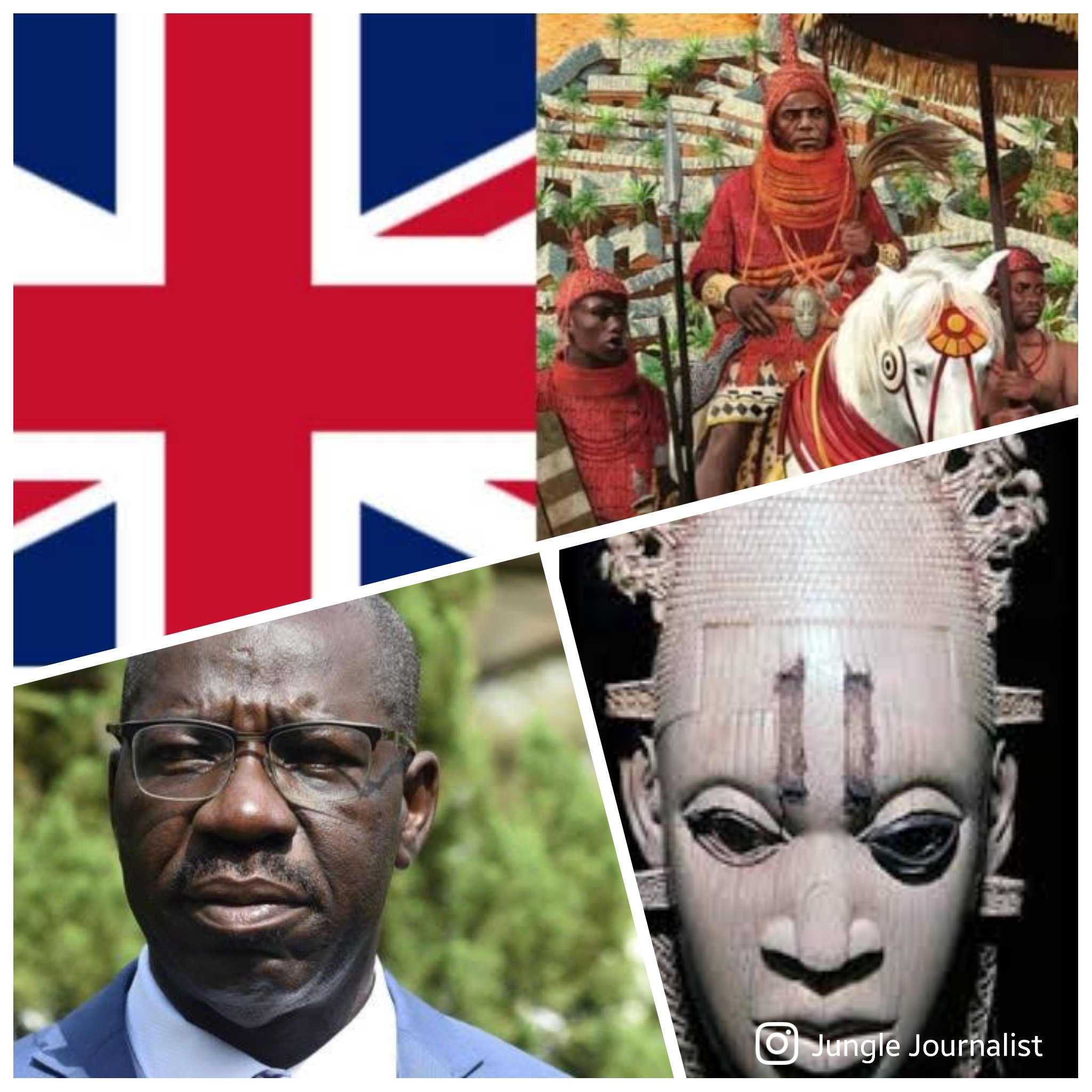 The Coalition of Benin Youth Groups has reacted to the planned building of a national museum by the Edo State Government and the Ministry of Culture and Tourism. The group, which frowned at the plan by the government to place stolen artefacts returned to Benin Kingdom by the German government in a museum, stated that the intentions of Governor Godwin Obaseki were mischievous, as he is allegedly only after the financial benefits that will come with the returned artefacts.

In its accusations, the Group challenged the governor to rebuild the burnt Oba market and Urhokpota Hall, both of which are part of the Benin heritage legacy he claims he wants to preserve, if truly he is sincere about his desire to preserve the heritage.

Arguing that the artefacts be returned to the Palace of the Oba where it was stolen from, the Group advised the governor to forget about his plans to build a government museum for the objects, as they were part and parcel of the great Benin heritage, and has got absolutely nothing to do with the government.

It read in parts “We wish to remind those behind the unholy act of wanting to divert the return of the Benin artifacts from coming straight to where it was stolen from, which is the Oba of Benin Palace, reference to this was the event of (1938) in a gesture of great significance to the Edo People, the British returned pieces of Oba Ovonramwen’s corals regalia and some Artifacts and was dully returned to the Palace of the Oba and was received by Oba Akenzua II, in an act of celebration, Oba Akenzua II thus restoring some of the sacred force of his ancestors upon receiving the regalia which was led by the Earl of Plymouth and Sir John Macpherson, the then Governor General of Nigeria. The poisonous arrow has killed the elephant a reference to long awaited for; at this point, Nigeria already existed and this artifacts was not returned to Nigeria Government but was returned to the Palace were it was stolen from which is the Oba Palace (Benin Kingdom).

“Over the years Oba Erediawa of Blessed memories used his national and international contacts, diplomatically using all other legal means…

“Gladly for the good people and true sons and daughters who had pray day and night to our God and ancestors Oba Eware II became an ambassador to many countries including European countries and our Royal father made good use of his relationship both locally and internationally to ensuring that we the (Benin people) will see a day like this where the European will return the stolen artifacts.

Finally they have agreed to return what they took forcefully from where it was taken (Oba Palace), and some elements in Government are trying to make dollars and euros from this by trying to use the Federal Government through the Ministry of Culture and Tourism in the name of building a National Museum. Any structure that must be erected must get an approval and must be guided by the Royal home (Oba of Benin) we the Benin youth reject in totality any act of wanting to be smart by Edo State Government headed by Mr. Godwin Obaseki, to reintroduce the invasion of the Benin Kingdom for the second time. We are known for peace and wish to maintain peace, but wish that the good people of Benin Kingdom are not taken for granted, and not be forced on a war path. We quickly wish to remind Edo State Government that Oba market as since be razed down by fire for over two and half years, the market is part of our history not even a block has been laid in the market, same goes with our own Urokpota Hall, which today Edo State Government has now turned to Motor park, till date nothing was done, our history is going right in the face of Edo State Government, but because of the assumed dollars and euro as to be benefited along with the return of the artifacts, they have suddenly become culture and tourism friendly. Edo State Government is in a hurry to prove a point that is certainly pointless.

“We wish the Government of Edo State do not bring politics into this as the Royal home cannot be political and will never be political. We are free born of the Benin Kingdom and will not allow any ugly history to repeat itself, as the Kingdom (Benin Kingdom) is known all over the World. The Palace and its environs are big enough to store any kind of artifacts that we will be repatriated from the Europe/British Government. We use this medium to call on all Edo Son’s and daughters to speak out now, as the silence of our friends will be the strength of our enemies, for those who are behind some funny publications in wanting to act as if the criminal plans of some persons are justifiable, you are known and be sure your sons and daughters will be reminded of the role you have played in wanting to bring about a second invasion in the Benin Kingdom.
To be forewarned is to be forearmed”, it said.