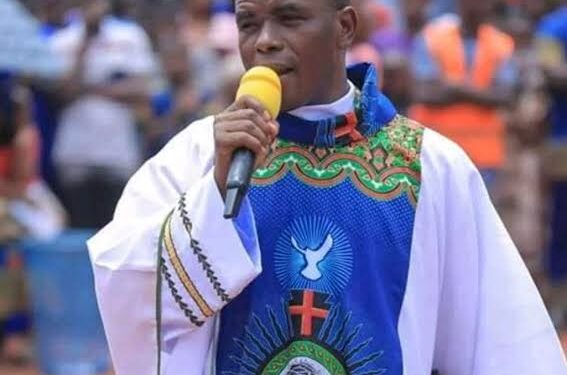 19
SHARES
189
VIEWS
Share on FacebookShare on TwitterShare on WhatsApp

The International Federation of Catholic Youth Movements, has uncovered plans by certain disgruntled elements to get the Reverend Father Ejike Mbaka poisoned at the headquarters of Department of State Security (DSS), Abuja.

Speaking to journalists on Monday, 7th June, 2021 in Enugu, the National Coordinator of the organisation, Mr Sabastine Kpoza stated that his organisation has it on good authority that a certain ‘high society lady’ was behind a sinister plot to have Fr Mbaka poisoned at the DSS, and allowed to return to Enugu, to die.

He however said that the DSS were not the ones after the Reverend Father, but that someone wants to use that avenue to achieve their heinous goal.

Addressing members of the Press, he said “we invited you here for a matter of urgent and grave importance. As you all are already aware, the Reverend Father Ejike Mbaka of Adoration Ministry Enugu has been invited to Abuja by the DSS. According to a very reliable source in the security, one high society lady who was a former member of the church has paid certain people to ensure that, while he is in Abuja, they should ensure that he is poisoned.

“We are very worried over this development, because over the past few months, there has been several negative reports against Fr Mbaka and Adoration Ministry. During our investigations, we have been able to trace all of them to the same source, the said lady. The sudden suspension of the Reverend, and subsequent shutdown of the ministry too, we have been able to connect to her. We shall soon be making our report public through the press but as at now, Reverend Mbaka’s life is in grave danger.

“In late 2020, the same lady had continued to say that she will shut down Adoration Ministry, and end the career of the Reverend. Its very clear that she has been sent from hell to battle the servant of the Lord, but she is bound to fail.

“Dear brothers and sisters in the press, we have a great problem in our hands. The deed is not going to be carried out by the DSS, but someone in there has been hired to carry out the dirty job. The intention is to either poison his food, drink or even air in the place he will stay. He will take ill over there, and die, days after he returns to Enugu.

“By this Press Statement, we are alerting the body of the church, all Christian faithful across the world of this sinister plan to destroy the Body of Christ by cutting down His faithful servant. While we want the world to be aware of this, in case anything happens to him, we are calling for general fasting and prayers by the church to protect its own. This is a clear attack against the church. After the Devil who summoned her to this evil deed succeeds with Mbaka (God forbid!), they will come after the rest of the Body of Christ.

“May God protect His own, may God bless us all”, Kpoza said.