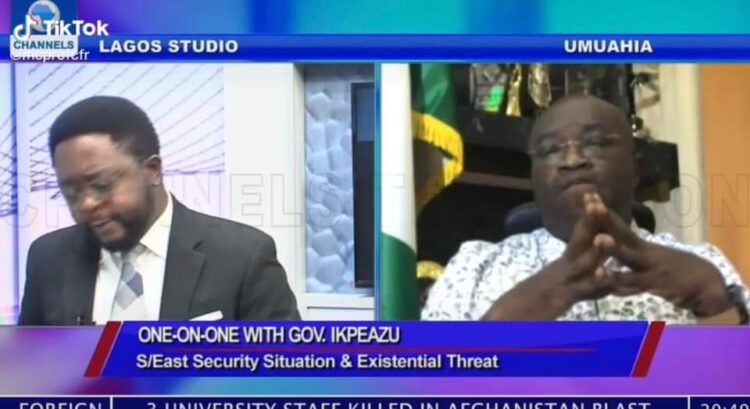 In response to a question by a ChannelsTV anchor during a recent interview on what his administration has done to change the narrative of a hitherto dilapidated Aba, Governor Okezie Ikpeazu of Abia State made the following comments which has since been mocked by his clearly unschooled political opponents:

“Oh well, they (critics) are entitled to their opinion but I don’t think they are right. For thirty years, it was impossible to access Ariaria from any flank whether you are coming from Port Harcourt or you’re coming from Brass, you had to at some point stop and people will back you… When I came to Aba there was no single street light standing in the name of Government but we have planted over 3,000 street lights in that city today, and anybody who says that Aba is not working…

“Today in Aba, you have Dominos, Chicken Republic, you have Market Place, you even have a Cinema now in Aba.”

Peace, Security and Stability in Abia, Some of my Greatest Legacies-Ikpeazu

To understand the above statement you need to know a little about the Aba Dr Ikpeazu met in 2015 and assess against current situation.

Since 2015, Governor Ikpeazu has worked hard to reverse the trend though deliberate engagements anchored on his superb local awareness and deliberate actions to save small and medium scale enterprises in the city from the quadruple challenges of lack of power, absence of automation, near zero capital availability and loss of market share for Made-in-Aba brands. The result of his focused efforts are there for all to see but suffice it to state that since 2015 when Governor Ikpeazu assumed office, there has not been a single successful bank robbery in Aba and Abia State, to the glory of God.

In addition to the above, Governor Ikpeazu has reversed the road infrastructure deficit he met in 2015 to the extent that, today, his critics now accuse him of “focusing only on Aba” having lost the usual talking points of bad roads in Aba.

Obviously, the Channels interviewer expected the Governor to itemize and highlight what he has done since 2015 to reverse the situation of Aba. But the Governor who is a well respected intellectual chose to point the interviewer to just one of the major markers of economic growth within a city: inflow of investments by organized private sector.

That Chicken Republic, Dominos, Market Place and the digital cinema house, whose owners had no previous relationship with Aba or Abia, decided to invest in Aba, speaks to total turnaround from what used to obtain prior to 2015 when similar businesses, including Mr Biggs, were closing shop and left Aba for other climes.

That example alone is enough for anyone who understands simple economics to know that Aba’s fortunes have been reversed totally from what the Governor met in 2015.

That some picked on that to attack the Governor speaks more to their own inability to grasp the positive economic development metaphor represented by the mentioned organizations. If Aba had remained dilapidated as was the case before 2015, would companies that make investment decisions on the basis of return on investment, security and availability of durable infrastructure come to Aba for the first time?

In addition to that, speaking to more than 3,000 street lights installed in the city by his administration to activate night economy in the city and support security improvement should interest investors in businesses that operate late into the night, such as the ones he mentioned, and also those involved in the informal economy of the city where beer parlors and other joints make fortunes at night. These businesses, no matter how little, form the fulcrum of MSMEs that form the pedestal for sustainable empowerment of the people in particular and the state’s economic growth in general.

By the way, most of the critics of Governor Ikpeazu directly and indirectly superintended over the Abia and Aba that never had a single street light installed by any government before his emergence. They were there when Aba was literally left for dead and the most they did was to run away from the city and leave it for dead. That those set of city wreckers have now found something to mock in Ikpeazu’s Abia is simply them mocking themselves and their sponsors who lacked the intelligence or capacity to reinvent Aba for Ndigbo or to save it from dilapidation.

Ikpeazu has changed the narrative in Aba and will likely do more, based on his advertised plan for the city in the coming months. Let his critics focus more on investing in Aba instead of advertizing their cluelessness on matters of growth and development of a city.

Governor Ikpeazu knows that while GDP is widely used to measure economic growth of a city, that alone does not indicate the health of an economy. There are other markers like investment inflow, local or international, and of course, the Ikpeazu administration can safely boast of thriving international businesses like Inner Galaxy that’s into steel production in the outskirts of Aba, the new automated shoe factory called Enyimba Automated Shoe Company (ENASCO), revival of Golden Guinea breweries among many others as clear signs that his administration is delivering on economic growth in the state. Even Nigeria Bureau of Statistics agree with him when they recently published a report that Abia received the 3rd highest foreign direct investment inflow in 2020, behind only Lagos and Abuja.

In a recent statement, Governor Ikpeazu responded to one of his critics thus:

“Let me reiterate without mincing words that I’m proud of our achievements as a government so far in critical areas of human capital & infrastructural development for which our great State, Abia, has been rated highly by the National Bureau of Statistics (NBS) which uses hard incontrovertible facts & figures to measure the socioeconomic performances of governments. Our efforts to reposition Abia for greater opportunities are surely yielding the desired results and the inflow of FDIs to the State is a confirmation that we are on the right track. It is not for nothing that in 2020, despite how COVID-19 ravaged world economy, and when 26 other states of the federation received ZERO Foreign Direct Investment, Abia received the 3rd largest FDI of $56m only after Lagos and Abuja. Such feats can only continue to strengthen our resolve to remain focused on doing the right things that will continue to bring prosperity to our land and its people and not be distracted by criticisms that are devoid of any known economic indices but only pander to emotions and politics.

“Foreign investors don’t go to invest in a state because they like the face of the Governor or because you advertise your State on TV. No! They come because they carry out their own independent studies of government seriousness and efforts at growing the State’s economy through human capital & infrastructural development among others. If government has provided the necessary favourable business environment through these means, then they will come without much ado. That is what we have been doing in Abia, and the result shows.

“We have been promoting the Made-in-Aba products, giving our local manufacturers the necessary resources including grants, training them abroad, etc all of which have led to increased patronage even by foreign clients. Our massive road construction projects, deliberate policies aimed at improving Ease-of-Doing-Business index, investments in education which has seen Abia return first in notable international exams including WASSCE for 4 years consecutively under our administration, our efforts at improving security etc, have all led to Abia becoming a choice destination for both local & foreign investors.

“The truth is that, these investors, no matter their normenclature or kind of business they do, have gainfully engaged hundreds of our youths, and we are glad about that.

“We are set to do even more for our people as we focus on leaving lasting legacies upon which we are sure posterity will judge us kindly”, he concluded.