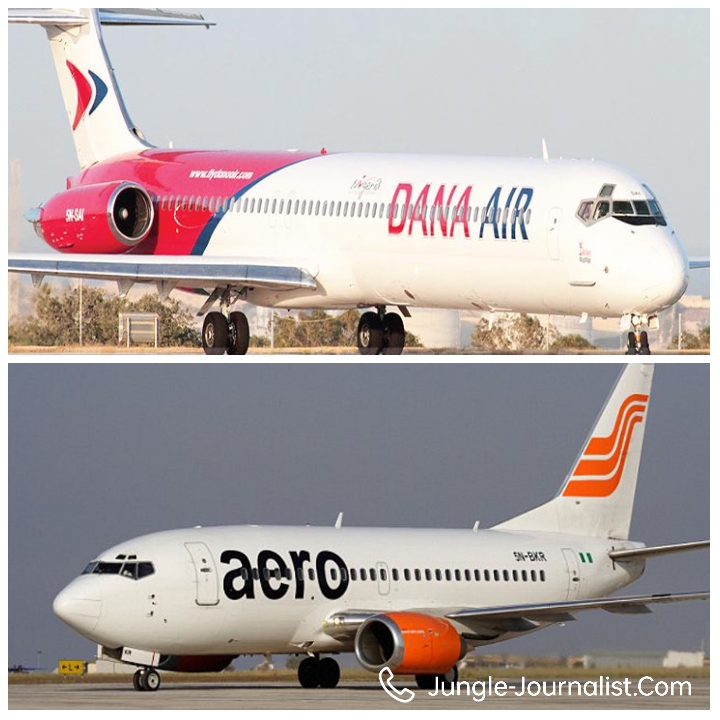 
The reality of the prevailing dire situation in the Nigerian aviation sector, which manifested in the withdrawal of services by Aero Contractors last week and the suspension of Dana Air operation by the Nigerian Civil Aviation Authority, over its poor financial status, is an indication that unless aviation authorities act swiftly, the fate that befell the two airlines may soon catch up with others, writes Chinedu Eze:

On Monday, the management of Aero Contractors, Nigeria’s oldest airline, announced that it would suspend scheduled flight operations due to a hostile operating environment and on Wednesday, it was the turn of Dana Air to cease operation no thanks to the directive from the Nigerian Civil Aviation Authority (NCAA) to ground their service as a fallout of the prohibitive cost of aviation fuel.

The suspension of scheduled flight services by the 61-year-old Aero Contractors due to the high cost of operations could be described as the augury of what is to come in an industry stretched thin by an acute shortage of foreign exchange, high cost of aviation fuel, an exodus of personnel that are moving to more lucrative markets and a hostile environment characterised by dilapidated airport facilities and lack of critical infrastructure.

This is evidenced by the action taken by the Nigerian Civil Aviation Authority (NCAA) on Wednesday. It suspended the operating licence of Dana Air because if the airline is allowed to operate it could jeopardise lives in an accident, as experts note that air safety could be threatened if an airline loses its robust finance to effectively carry out maintenance of aircraft in its fleet, remunerate its workforce as at when due and abide by other financial obligations.


“The decision is the outcome of a financial and economic health audit carried out on the Airline by the Authority, and the findings of an investigation conducted on the airline’s flight operations recently, which revealed that Dana Airlines is no longer in a position to meet its financial obligations and to conduct safe flight operations,” the statement said.

This is the precarious situation Nigerian airlines are facing, high cost of aviation fuel, high exchange rate and the depreciation of the naira. These are unpretentious threats to their existence, but industry sources said the first casualties might be the airlines with very limited capacity. Nigeria has about eight domestic airlines in operation with about 43 aircraft but a significant number are not in active service. Many of them operate an average of three aircraft, except Overland Airways, Ibom Air and Air Peace, which has the highest capacity in Nigeria.

But the warning signs that Aero might not go the whole hog came about two months ago when it was stripped of its fleet, leaving two ageing aircraft: a Boeing 737 and a Bombardier Dash 8 and totally cash strapped as it was battling huge debts estimated at over N50 billion.

Aero Contractors management in a statement on Monday said, “Due to the impact of the challenging operating environment on our daily operations, the management of Aero Contractors Company of Nigeria Limited. wishes to announce the temporary suspension of its scheduled passenger services operations with effect from Wednesday, July 20, 2022.

“This decision was carefully considered and taken because most of our aircraft are currently undergoing maintenance, resulting in our inability to offer a seamless and efficient service to our esteemed customers. We are working to bring these aircraft back to service in the next few weeks, so we can continue to offer our passengers the safe, efficient, and reliable services that Aero Contractors is known for, which is the hallmark of Aero Contractors Company of Nig. Ltd,” the airline said.


It also explained that the past few months have been very challenging for the aviation industry and the airline operators in particular with the high cost of maintenance, skyrocketing fuel prices, inflation, and forex scarcity resulting in high foreign exchange rates, adding that these are amongst the major components of airline operations.

Aero Contractors had been walking on a thin line between survival and extinction due to huge debts incurred by the former management when it acquired old aircraft at a highly inflated cost. The former Oceanic Bank supplied it with fiscal oxygen to sustain its operation until when it was absorbed by Ecobank Transnational Incorporation in October 2011.


THISDAY learnt that the airline’s bad situation was exacerbated by the high cost of aviation fuel, which price has continued to spiral, threatening the operations of other domestic carriers. With its financial inanities exposed, the airline suffered hiccups and became moribund until the Asset Management Corporation of Nigeria (AMCON) came to its rescue.

A former senior official of the airline and now the Managing Director/ CEO of 7 Star Global Hangar Nigeria Limited, Isaac Balami, told THISDAY that AMCON tried to rescue Aero Contractors when it took it over. It injected billions of naira into the airline and Arik Air, but after some time the agency felt it would not continue to inject funds into the airline, recalling that during that period the federal government and the then Minister of Aviation were worried and wanted to safeguard the jobs of the personnel and that explained why it continued to operate till the recent shut down; although there were times it stopped operation temporarily before it was revived in 2017.

The airline, which had provided shuttle service for the oil and gas industry for decades and extended its service to scheduled flight operations since 2000 was burdened by huge debts.


THISDAY investigations revealed that the economic recession occasioned by the COVID-19 lockdown and protracted low season after December heavy passenger traffic demand culminated in the financial drought of the airline.

Before this announcement by the management, the airline was finding it difficult to fuel its existing fleet

Two months ago, the management of the airline confirmed to THISDAY the precarious state of the airline and identified factors that led to the debilitating condition of the indigenous carrier and pointed out that the Aero could stop operation at any time because the management was finding it increasingly difficult to keep the aircraft in the airspace.

The high cost of aviation fuel, which is a global problem, is stripping Nigerian airlines of operational cash. It also pushed up airfares, forcing some potential travellers to keep away from the airports and use the roads, despite security threats. With a N50,000 base fare, airlines charge as high as N80,000 for a one-way flight. This has forced passenger traffic to drop on domestic air travel and has put the airlines in a quandary. The airlines do not have a choice but to pass some of the cost of aviation fuel to travellers.


Even at that, THISDAY learnt that some airlines might also suspend flight operations as their financial resources continue to deplete without recompense.

Last Tuesday, the Airline Operators of Nigeria (AON) frowned at the decision of the Federal Airports Authority of Nigeria (FAAN) to close the domestic runway at the Murtala Muhammed Airport, Lagos to install airfield lighting and argued that closing the runway, known as Runway 18L, for three months would cost the airlines billions of Naira in fuel burn, as aircraft trudge from the international runway to the domestic terminals, which could take about 30 minutes.

Industry expert and former Commandant of Murtala Muhammed International Airport, Lagos, Group Captain John Ojikutu told THISDAY that the problem of Aero did not start today but started about 2010 when the British technical partners were allegedly sidelined and the management came under single management of the Ibru family.

Ojikutu explained that two years later Aero went into debt under the management of AMCON with limited knowledge in commercial aviation, adding that single management killed Arik Air alongside Aero and the defunct Okada Air, Kabo, Nigeria Airways Limited, which was a national carrier and others.

“Fuel prices have been irregularly increased almost monthly despite what the government called subsidies to fuel marketers. Within a year, it has quadrupled from N200/ltr to N800/ltr. 1.3 million barrels per day is what we are being told that are exported out of a production of 2.3 million barrels produced per day; what happens to the balance of one million barrels?” he asked.

The aviation industry has been tamed and frightened. Many observers note that unless the situation improves, more airlines may shut down their services.