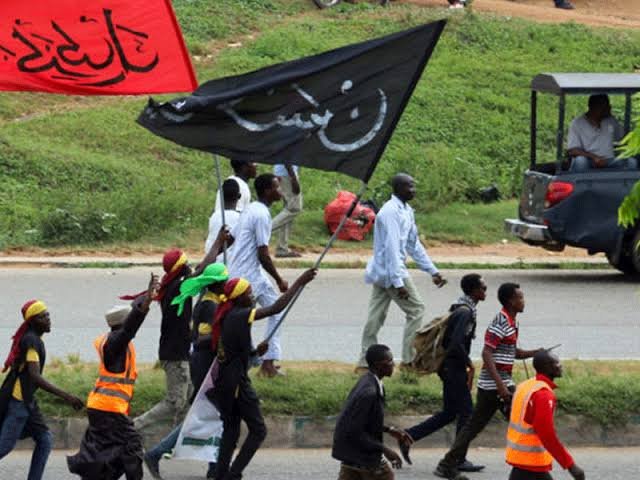 At least eight people were feared killed on Tuesday after unidentified men in military uniform opened fire at some members of the Islamic Movement in Nigeria, IMN (known as shi’ites) who staged the annual Arbaeen trek at Gwarinpa district of Abuja, the nation’s capital, Gwarinpa

Vanguard correspondent gathered that the gunmen attacked the sect members near the tricycle park at 3rd avenue, Gwarinpa around 10:00 am.

Eyewitnesses told our correspondent that the armed men, who came in security patrol vans, stormed the area without prior notice to residents.

Although details of the attack were still sketchy, one of the sources told Vanguard that the suspected operatives killed about eight people including a passersby.

One of the sources who spoke on condition of anonymity said, “It was around 10:00 am we started hearing gunshots along the road. The shooting lasted about 10 minutes. But after the shooting, the gunmen appeared to have succeeded in thoroughly dispersing the Arbaeen trekkers.

“I can’t say how many people were killed but the corpses we have counted were eight. What I can tell you is that up to eight people were killed in the incident. Some of the passersby who had nothing to do with the Shi’ites may have also been involved.”

When contacted, the Secretary of IMN’s Academic Forum, Abdullahi Musa, confirmed the incident but could not provide casualty details.

Musa, in a telephone call with our correspondent, simply said, “The Arbaeen trek is an annual street demonstration by Shi’ites globally. Since the military authorities demolished our Centre in Zaria, we have been leading the religious trek from here (Abuja). It began on Monday. However, we had hoped to conclude the activities today (Tuesday).

“So, we assembled at the Galadima gate (Charly Boy bus stop) in Gwarinpa around 9:00am, and staged our religious walk peacefully for about an hour. We neither made any demand on the government nor criticised anyone during the trek. It was purely a spiritual exercise for us.

“But as we were about to disperse, security operatives arrived the scene and opened fire on our members, injuring many and killing some people. As for the casualty figures, I need to verify the numbers and get back to you, please.”

Earlier, the Shi’ites staged a similar street procession in Nyanya – Mararaba axis of the FCT.

The trek, which kicked off from Masaka and terminated in Mararaba, caused a major gridlock in the area.

Some members of the sect were seen with placards including portraits of the sons of their leader, Ibraheem El-Zakzaky, who were killed during the ‘Zaria Massacre’ of December 2015.

Speaking to journalists after the trek, IMN’s Sheikh Sidi Sokoto, said: “Today, the general public has witnessed how the Arbaeen trek like those before ended without any attempt to curb the right of safe passage to other road users. No panic was created by our Arbaeen trek.

“Though we started with few people and confined ourselves to a particular place and recited some supplication, we thank Allah now; we trek in millions globally.

“This is the handwork of Allah, and not the trick or influence of anybody as no one forced us to trek, it is out of free will and love for the family of the Prophet.”