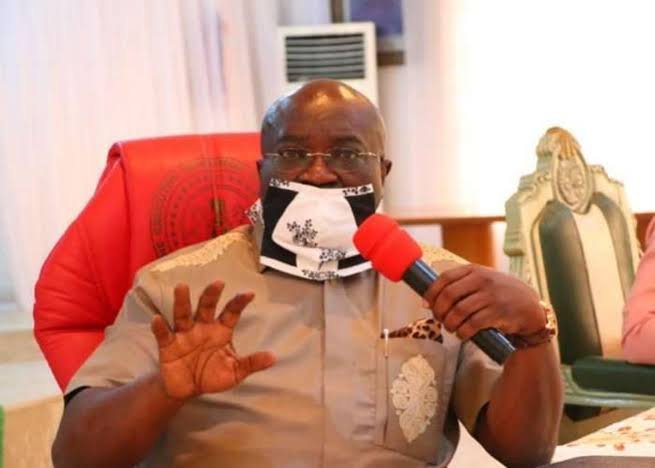 …What next President should do to make Nigeria better

…Backs PDP’s zoning of Presidency to South in 2023

Abia State Governor, Dr. Okezie Ikpeazu, on Sunday, said that the current faceoff between the leader of the Indigenous Peoples of Biafran Nnamdi Kanu and the federal government could be resolved on the negotiation table to pave the way for peace and justice.

The governor, who spoke in an interview with Vanguard in Abuja, also said that the inability of Southeast governors to respond to the weekly sit-at-home order by the Indigenous People of Biafra, IPoB, was due to the fact that none of them controls the security apparatus in the country and cannot therefore deploy what they do not have to deal with security challenges in the zone.

Ikpeazu assures Ukwa West of effective representation in the Senate

Dr. Ikpeazu admitted that despite the issues raised against the IPoB leader and his followers, the issues around their agitation could best be resolved through engagement, arguing that there were salient issues in what the group is talking about that require attention.

The governor said: “We must engage with IPoB. Yes, we must find a way to talk about the issues at stake. These people are not as bad as the ones in the Northeast or northwest who go to schools and seize the whole population of teachers and students or invade the mosques and churches and kidnap all the worshippers and nobody can find them until ransom is paid.

“I believe that there is some ideological sense in what these people in the Southeast are saying. There is something to listen to even though it is criminal to take up arms against the state. There is a message they are trying to pass in the process. We need confidence building among ourselves rather than use words that we should not use even as leaders. Nigeria is sitting on a keg of gunpowder but the solution is not too difficult to find.

“I regard Nnamdi Kanu as my citizen but not as leader of IPoB because I am the governor. I am prepared to engage to resolve the issue. I care about his welfare and I care that he should be tried in a just and fair way. I am happy that they want to bring justice to bear by looking at the allegations against him and trying him fair and square but I would not want him to be treated as if he was a convict when he has not be convicted. Not until otherwise he is still my citizen and as his father it behoves on us to care for him after all the prodigal son had a father.

“The scenario you in the Southeast appears as if we are running away from the foundation of solving the problem of IPoB but you must recognize the fact that the apparatus of security lies heavily on the federal government.

“That is why when IPoB gives sit-at-home order; the governors are unable to counter effectively because they do not have control over Federal police, which are neither adequate nor well equipped to deal with security challenge.

“The problem is further compounded by the fact that there is proliferation of small arms in the hands of people who should not have them. We also have ill-equipped, inadequate and underfunded police system in the land.

“If you call governors the chief security officers of their states and they cannot determine the number of policemen they can deploy and the kind of equipment to use, then it becomes extremely difficult for governors to take control of security issues in the South East. The Southeast governors are handicapped but we are trying our best,” Dr. Ikpeazu said.

Reacting to the 2023 Presidency, the governor said it was right and proper for his party, the Peoples Democratic Party to zone the presidency to South after President Muhamamadu Buhari might have completed his two terms of eight years in the spirit of equity and justice.

But Governor Ikpeazu made it clear that it was left for the three Southern zones to come to the negotiating table to decide why particular zone in the South, which has never produced the President to take the shot in 2023, apparently referring to the Southeast.

“Our zoning options have been spelt out by the PDP and it says that the Chairmanship of the party should go to the North in 2023. As an individual, I feel that the weight of equity and justice favours the president from the South and when we come to the South, we find out which zone has not yet produced the president and give then ticket to that zone.

On the qualities the next president of Nigeria should possesses, Governor Ikpeazu stated that he should be one capable of correcting the wrongs that have been done to the majority of Nigerians and rebuilding their confidence and hope in governance.

He said: “The president we need in 2023 is one that is capable of visiting all the 109 Senatorial districts at least three times a year and meeting in a town hall with the people and apologizing to them that we have wrong them.

“The next president must be ready to engage with the people and discuss what he is doing and give explanations for what he can do and what he cannot do. We must apologize to the people because we have really not done well and make the people to feel a sense of belonging,” the governor, whose birthday comes up, next Monday, said.