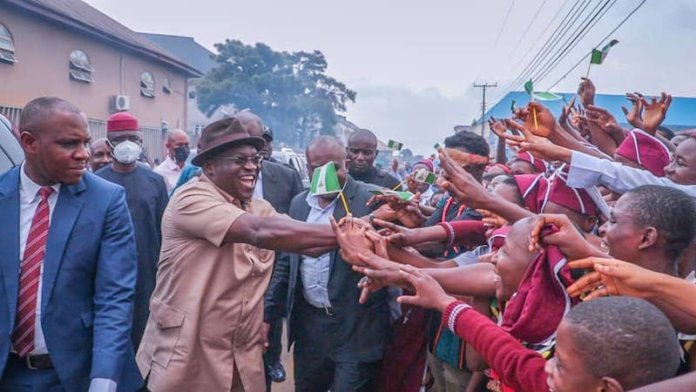 Immaculate Heart Road Umungasi Aba in Osisioma local government of Abia State is home to many private schools and a big parish, the SS Anthony and Jude Catholic Church.

But for over a decade the area was not accessible due to the deplorable state of the road.

Students and their teachers waded through muddy water to and from school, business owners lamented low patronage due to bad road which put off prospective customers and landlords agonised over the low value of their properties as rents plunged because people relocated from the area.

The parish priest of SS Anthony and Jude Catholic Church, Rev Fr. Francis Onuoha said the deplorable state of the road became so unbearable that many of his parishioners decided to relocate to other parts of Aba.

Afghanistan: Taliban beat, shoot at women for protesting against school bombing that killed 35

However, on July 9, 2021 the lamentations of the residents of Immaculate Heart road gave way to songs of joy and happiness as a newly reconstructed road was inaugurated by Governor Okezie Ikpeazu.

Students, teachers, Reverend Sisters, members of the Catholic Women Organisation in their trade mark uniform and indeed residents of Umungasi poured onto the newly built road to welcome Ikpeazu and his entourage and thank him for the new road.

It was a big sigh of relief for them as a smooth, solid road with drainage system emerged to replace the hitherto inaccessible road.

Band boys from some of the schools competed for attention as they played out their hearts while waiting for the arrival of the governor. Students lined up waving mini Nigeria flags. It was a joyous occasion.

Fr Onuoha was so overwhelmed with joy at the new look road that he prophesied that his parishioners that “ran away” when the road was so bad would come back. He profusely thanked Governor Ikpeazu for reconstructing the road, noting that the ongoing urban renewal in Aba has shown that Ikpeazu ‘is a real Nwa Aba” (Aba son).

Chairman of Immaculate Good Neighbours (Landlords)Association, Prince Nweze was equally riding in the pink cloud as he lauded Governor Ikpeazu for remembering their area in his distribution of road projects.

“The reconstruction of Immaculate Heart road is a testimony of your desire to make the entire Abia conducive for living and for doing businesses,” he told the governor. “Things are moving smoothly now and businesses are growing”.

Governor Ikpeazu was very much impressed with the level of appreciation shown by Immaculate Heart residents that he announced scholarship awards to seven students that sang welcome song and other performances.

He used the occasion to defend the perceived slow pace in execution of projects by his administration, saying that his “slow and steady” approach was aimed at delivering quality infrastructure to the people of Abia.

Ikpeazu was emphatic that there was no need to rush through projects only to end up with poorly executed jobs that would not serve the intended purposes.

The governor said that he preferred to take his time and ensure that everything needed to guarantee quality and durability of a road project was put in place before commencing and completing the job.

“There is no need for me to build a road without drainage or road that would collapse soon after. I take my time to build roads that would last long and make people happy,” he said.

Ikpeazu assured that with the quality of the road projects his administration has executed, his successor would not have any cause to embark on repairs or reconstruction of such roads.

According to him, the cement pavement technology used in building the roads guarantees life span of upwards of 25 years, assuring that even with the perceived slow pace he would complete all undertaken projects before the end of his tenure.

The Commissioner for Works, Chief Bob Ogu promised residents that the road would be fitted with street lights in a month’s time, adding that Immaculate Heart road is very important because of the number of schools located in the area.

Ogu further stated that the road which is off the Aba-Owerri road(the main entry point into Aba) would be extended to link up with Ogbor Hill, adding that the linkage bridge has already been designed.

Nigeria listed among world’s most dangerous countries for 2021

ANAMBRA 2021: Under my watch, no criminal will operate in Anambra and go free- Akachukwu Nwankpo

ANAMBRA 2021: Under my watch, no criminal will operate in Anambra and go free- Akachukwu Nwankpo