Nigeria listed among world’s most dangerous countries for 2021 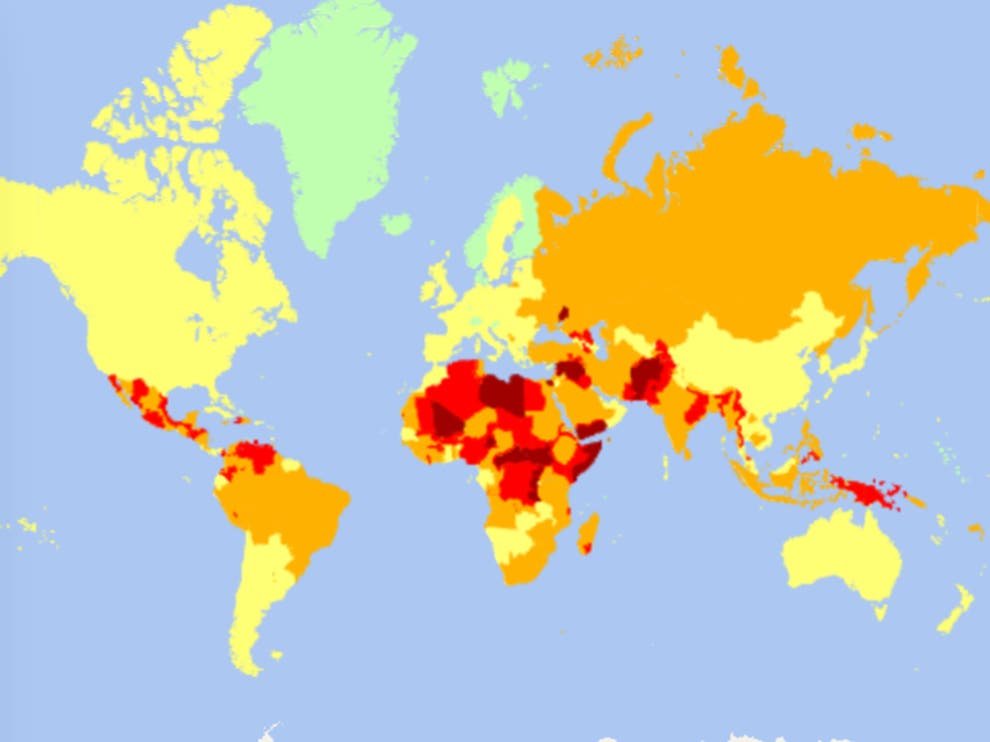 A new map has revealed the countries with the highest security risks for 2021.

Libya, Syria and Afghanistan are among the most dangerous, according to global medical and security specialists International SOS, which has assigned destinations one of five risk categories based on the threat posed by political violence (including terrorism, insurgency, politically motivated unrest and war), social unrest (including sectarian, communal and ethnic violence) and violent and petty crime.

The robustness of the transport infrastructure, the state of industrial relations, the effectiveness of the security and emergency services and the country’s susceptibility to natural disasters were also taken into account when rating each country.

The lowest risk level, “Insignificant”, was only awarded to seven countries, all in Europe: Iceland, Denmark (and the autonomous territory of Greenland), Norway, Finland, Switzerland, Slovenia and Luxembourg.

Along with most of Europe, the UK is rated as “Low” risk, as are the US, Canada and Australia, among others.

Countries that have been given the highest risk warning, “Extreme”, are mainly located in Africa or the Middle East.

There are 14 “Extreme” risk destinations in total: Afghanistan, Yemen, Syria, Libya, Mali, Somalia, South Sudan and the Central African Republic, along with parts of Nigeria, the Democratic Republic of the Congo, Ukraine, Pakistan, Iraq and Egypt.

Regions have been classified as a different category to the rest of the country where the risks faced are different from the country’s “overall risk environment”, usually necessitating a different level of preparation, according to International SOS.

The definition of an “Extreme” security risk country is: “Government control and law and order may be minimal or non-existent across large areas. Serious threat of violent attacks by armed groups targeting travellers and international assignees. Government and transport services are barely functional. Large parts of the country are inaccessible to foreigners.”

More than 55 per cent of countries in Africa are now fully or partially in the “high” or “extreme” security risk level after increases in militancy or insurgency.

The map also assesses countries’ medical risk pre-pandemic, with the UK, Western Europe, the US, Canada and South Africa among the places identified as carrying the lowest risk.

Post-pandemic, an assessment of how much Covid-19 is affecting business operations saw just a handful of places categorised as “Very Low” risk: Tanzania, New Zealand, Nicaragua and Svalbard.

Meanwhile, only one country, Georgia, was designated the highest risk rating.

My health deteriorating, I may die in detention-Nnamdi Kanu