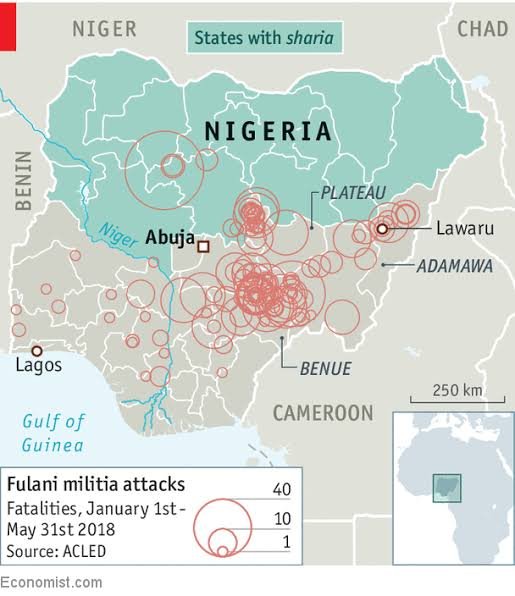 Map showing areas where Fulani militia have attacked Indigenous Peoples in the country.

“The new nation called Nigeria should be an estate of our great grandfather Othman Dan Fodio. We must ruthlessly prevent a change of power. We use the minorities in the north as willing tools and the south as a conquered territory and NEVER ALLOW THEM TO RULE OVER US and NEVER ALLOW THEM TO HAVE CONTROL OVER THEIR OWN FUTURE.” – (Sir Ahmadu Bello

Frontline activist and president of One Love Foundation, Chief Patrick Osagie Eholor has called on all Nigerians to awaken to what he called the deliberate, systematic encroachment of all the nooks and crannies of Nigeria by Fulanis with the intention of recolonising the free nations of Nigeria.

Eholor, who is otherwise known as Ultimate Equal, and Nigeria’s Democracy Observer General, enumerated several guises and methods adopted by the Fulani to achieve this goal, saying they have no interest in a United Nigeria, but believe they are superior to others and must subjugate them all.

Citing the numerous parastatals and government offices in the country, Eholor stated that the take over of Nigeria by the Fulani is deliberate and all that they want is to gain power, without competence in their mind at all.

The social rights activist was reacting to the recent complicity of the so-called supercop, Abba Kyari, who was suspended from the police force, following his alleged involvement in fraud.

He said Kyari was a dummy the Fulanis have been packaging to sell to Nigerians as the next IGP of Police, arguing that this one of the methods they adopted to further their colonization-Fulanization agenda.

His words “I believe in one Nigeria and in the unity of Nigeria. A lot of people split innocent blood to protect their selfish goals, but let me emphasize that the this so-called federal character is fraudulent. We must all wake up and call for a referendum, we must save this country called Nigeria it is now or never.

JUST IN: ECOWAS Court set to hear One Love Foundation’s N100bn case against FG over abduction, detention of Gloria Okolie

“Nigeria is the only oil-producing country where oil wells are allocated to individuals. The Hausa-Fulani cabal allocated over 80% of the oil blocs either to the Northerners or to their Southern fronts/allies. This is not a secret.

“Islam is the only religion that is mentioned robustly in the Nigerian constitution, said to be a secular document. For instance, no single mention of Christianity is done in the 1999 constitution, whereas Sharia is mentioned 73 times, Grand Khadi 54 times, Islam 28 times , Muslims 10 times, etc.

“During Obasanjo’s govt, a cabal made up of Fulani elements and other Northerners adopted Islam as the State Religion in the core Northern States. Obasanjo could not confront them, because he was afraid of the cabal.

Nigeria is the only African country that built a new capital from scratch using resources from the oppressed, deprived and degraded Niger Delta/South East.

Nigeria is also the only country that depends wholly on resources from only one region. Despite the abundant availability of natural ans economic resources across the country, the north, controlled by the Fulani, has ensured that only money made from crude oil is used for the running of the government. Many states in the north have gold mines, but the resources coming from these mines are in the hands of private firms, controlled by northerners, yet the resources of Southern Nigeria is in the hands of the Nigerian government. Remember I earlier said that 80 per cent of the oil wells are allocated to Northerners, mostly Fulanis who do not even know where the wells are located. But the owners of the land where these wells are do not have a say in the wealth made there. It’s that bad.

The north tacitly moved the capital of Nigeria to Abuja, claiming that Lagos was not very secure. The reason for this was for them to take over the control of the government and Northernize national public service.

As the nation’s capital, the Governors of Lagos State were from East, West and North. But no single FCT Minister has ever come from the south. All of them have come from the north, and are always Muslims.

Nigeria is the only federation in the world where 90 percent of the main security agencies are headed by only one section of the federation and only members of one religious faith.

No southerner has been made substantive Comptroller General of Customs in 30 years.

No southerner has ever been appointed as the Chairman of the Economic and Financial Crimes Commission since the day it was established in 2003.

Examples of such nepotistic appointments abound across board in the country.

In the education sector, concessions and waivers granted people from the core north, most times to the detriment of other Nigerians.

The unbelievable argument is that some waivers have to be introduced to avoid one section of the country over-running federal facilities etc!

The Federal Ministry of Education designed its programme forchildren who wrote National Common Entrance Examination in such a way that, dull children from the north receive equal privileges with their southern counterparts who are far more brilliant and qualified than they.

For example, one scheme of work and syllabus is given to all children seeking admission to Federal Government colleges, whether they are from the south, east, west or north.

But despite them writing the examination same day under the same condition of timing, Test and Measurement parameters, the cut-off marks after results are released are wide apart.

While the candidates from Abia State are expected to score as high as 130 to get admitted into any of the Federal Government Colleges, the candidate from Jigawa would need just 44 or, and the one from Yobe or Zamfara States will need just two marks to get on board. So, an Imo student with 135 or Ogun with 130 may never be admitted because they didn’t score up to the cut off mark for their states.

Under Age Voting At Elections—Under age and voting at elections has become a norm in the north, and security agencies accept it as such.

During elections, underage voting become so popular that kids as young as 8 to 12 years lose for the camera, to show odd in the social media or news, where they are voting, or getting issued voters card.

Despite being hugely populated, Fulani oligarchs want to continue to use the northern population to keep the rest of the country under them. So, they also resort to bland illegalities like child voting to carry out this electoral criminality.

Such waivers cannot take place in the Southern part of the country.

Security agencies and Electoral officers down south are far more vicious in ensuring compliance with electoral rules and guidelines than it happens up north.