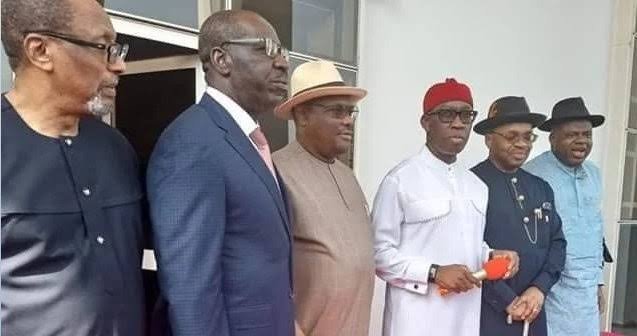 Governors of the South-South states on Monday declared that they will apply to be joined as interested parties in the controversial Value Added Tax (VAT) case against the Federal Inland Revenue Service (FIRS) already before the Supreme Court in Abuja.

The governors made the declaration after the meeting of South-South Governors’ Forum held at the Rivers State Government House in Port Harcourt.

Chairman of the forum and governor of Delta State, Dr. Ifeanyi Okowa, who read the resolutions of the meeting, said governors of the region will apply to be joined in the suit.

They expressed their support for the judgment of the Federal High Court, in Port Harcourt which granted power to the Rivers State Government to collect VAT within the state.

But in an appeal filed by Federal Inland Revenue Service (FIRS), Justice Haruna Tsanami of the Court of Appeal, Abuja Division, restrained the Rivers and Lagos State Governments from enforcing the order.

But rising from an emergency meeting of the governors, Okowa said; “Equivocally support the decision for states to collect Value Added Tax (VAT) and for states to join the suit before the Supreme Court.”

The council also resolved to form a South-South regional security network for the purpose securing lives and property.

“After an extensive deliberation, the council resolved; first, bearing in mind most of the BRACED states have established their security organs, we have approved a regional security network which will be launch very soon.

“We urge that the amendment should include a clear definition of host communities and that the trustees should be appointed by state governments.

“The Council calls upon Mr President to uphold the law establishing the Niger Delta Development Commission (NDDC) by appropriately constituting its board.

“In addition, we express the hope that the Federal Government will make the report of the forensic audit public and do justice and fairness to the report with a view of strengthening the capacity of NDDC to meeting its obligations to the people of the region.”

My name is Ifeanyi, an Igbo man from South-South, says Gov. Okowa