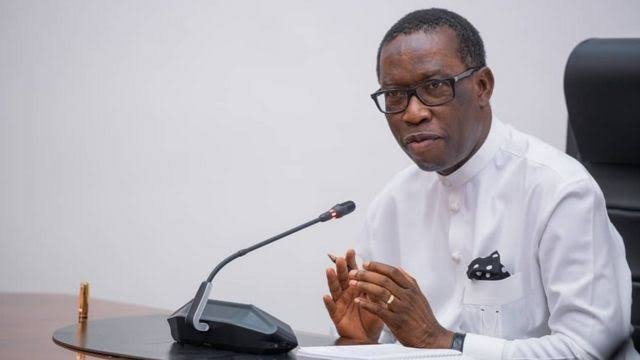 Delta Governor, Senator Ifeanyi Okowa, on Saturday said resolutions reached at the Southern Governors Forum’s meeting held in Asaba recently were for the good of the nation.

Okowa stated this while speaking at the empowerment of constituents of Aniocha/Oshimili Federal Constituency by their representative and Minority Leader of House of Representatives, Rt. Hon. Ndudi Godwin Elumelu, in Asaba.

He said that anyone casting aspersion on the resolutions of the Forum towards a better Nigeria did not mean well for the nation.

The governor remarked that restructuring, ban on open grazing and other issues raised by the governors had been subjects of agitations, aimed at pulling the country out of the present multiple challenges facing it.

He commended the Southern Governors for putting the interest of the nation above political affiliations, tribalism, religious inclinations and selfish interest.

Okowa thanked members of the National Assembly from Southern Nigeria for replying their colleagues appropriately over their unguided statement on the position of the Southern Governors’ Forum.

He added that the time was ripe for leaders and stakeholders from all parts of the country to endorse the communique issued by the Southern Governors as a road map for rebuilding a new Nigeria where all interest groups would be treated equally in the “Nigerian project”.

According to him, every elected representative has the right to speak up for the people and we, as governors, spoke because things were going on in the country contrary to expectations.

On who to succeed him in the state in 2023, the governor sued for calm, and cautioned politicians against heating up the polity.

According to him, the collective interest of the people should be placed above self, irrespective of ambitions.

He stated that his administration had been fair in the implementation of policies and programmes across the state, and advocated for a governor that would carry everyone along in the scheme of things.

“We are politicians and politics will have to be played. I can see that a lot has been on in our dear state, especially the scramble on who will replace Dr. Ifeanyi Okowa come 2023.

“Unfortunately, some were not even patient. They started their campaigns in the first three months of my second term in office.

“I want to charge our leaders and people to be cautious because politics is such that if you don’t read it rightly, you will directly throw your people into fire.

“I am not all-knowing, but at the appropriate time, leaders must be ready to sit down for us to do a proper analysis politically, before we take decisions so that we will not lead our people into darkness.

“I want to caution our leaders who are jumping the ship because of the very little thing that has been provided for them. It is not about self, it is going to be about the people.

“I am the governor of the state and I appreciate it. I believe in equity and will not shy away from the fact that I am from Delta North Senatorial District,” he said.

“By the grace of God, in our approach to governance, we have been fair in what we do. Shine your eyes so that people will not come to lure you with N500,000 and N1,000,000 and you sell the conscience of your people and you lure them into fire.

“I believe in equity; It has shown that we are not inferior in Delta North. Please let us stay cautious, especially, the leaders.

“Who ever is coming to rule this state, by the grace of God, must be somebody who is ready to ensure that there is fairness, equity and justice.