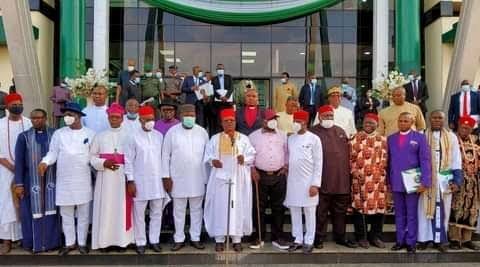 South-East Governors and leaders of thought, including Ohanaeze, traditional rulers, and clergymen, yesterday, practically aligned with the South-West zone on the issues of state police, regional security outfit, and ban on open grazing.

This was the kernel of their meeting in Enugu, after deliberations on worsening security situation in the region.

This came as no fewer than eight security operatives were on Saturday night killed by unidentified gunmen in Rivers State.

The meeting endorsed the establishment of Ebube Agu security outfit to work with the Police and other security agencies in their operations to protect lives and properties in South-East zone.

The meeting disclosed that the structure and operational modalities of Ebube Agu have been set up, though they were not made public.

The meeting also said that an Advisory Board for the security outfit has been set up and that Attorneys-General and Commissioners for Justice of the South-East states have been directed to work with the Joint Security Committee to come up with the amendment of existing state laws to reflect the new Ebube Agu outfit.

It directed Ohanaeze Ndigbo President-General “to immediately form two committees of South-East Peace and Reconciliation Committee to “engage our people for the purpose of security of our people and her visitors,” and “security and welfare committee to engage and protect our people, especially those who have been unfairly treated.”

It also said that “these Committees must become functional within the next 10 days from the day of establishment.”

The leaders also restated its support for restructuring and State Police.

It condemned the attacks on the country home of the Governor of Imo State, Governor Hope Uzodimma of Imo State and other state infrastructure, saying “we sympathize with him and call on the Federal Government to fish out the perpetrators and ensure their prosecution.”

The meeting restated the commitment of South-East leaders to ban open grazing in the zone, and urged security agencies and the local vigilantes to enforce the ban in all states of the South-East.

The gathering noted that South-East Governors have agreed on implementation of various ENDSARS Youth Empowerment Programmes in South-East states as soon as possible. However, details of the programme were not made public.