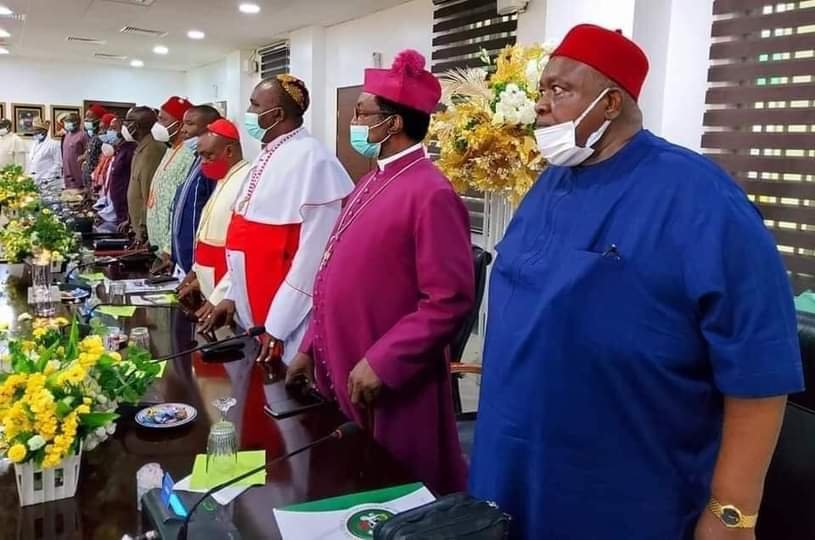 The leaders of the South East geopolitical zone have reaffirmed their commitment to the sustenance of a united Nigeria where there is justice, equity and equality of all Nigerians.

The leaders stated this today after their meeting with representatives of the Federal Government held at the Government House, Enugu.

They also restated their position on the total ban on open grazing of cattle as a panacea to the menace of herdsmen in the region, saying that all the states of the South East have laws banning open grazing and that these laws must be respected.

The leaders also condemned the unjustified attacks on security formations in the region and assured that another meeting of the leaders will hold later this month after which the leadership of Ndigbo will meet with the President.

Speaking earlier, the leader of the Federal Government delegation and Minister of Defence, General Bashir Magashi (Rtd) assured the people of the South East that the federal government will painstakingly look into their concerns, especially in the area of marginalization and come up with action plans to deal with it.
General Magashi said that the federal government is in agreement with the ban on open grazing of cattle and assured that a follow up meeting between the President and the leaders of the South East will take place soon to iron out all the issues.

All the Governors of the South East were present, except for Anambra State which was represented by the Deputy Governor.
Senate Minority Leader, Senator Enyinnaya Abaribe, former Senate President Ken Nnamani, former Deputy Senate President, Ike Ekweremadu, Minister of State for Mines and Steel Development, Dr Uche Ogah, House of Representatives member, Hon. Nkeiru Onyejeocha, Traditional Rulers from the region including Hrm Eze Joseph Nwabeke, the Chairman of the Abia State Traditional Rulers Council, Religious Leaders from the region including the Chairman of the South East Chapter of the Christian Association of Nigeria, Bishop Goddy Okafor, the Abia State Chairman of CAN, Apostle General Agomuoh and the Rt. Rev Christian Ugwuzor, the Anglican Bishop of Aba.

Democracy Day not smooth but worth celebrating, says Diri