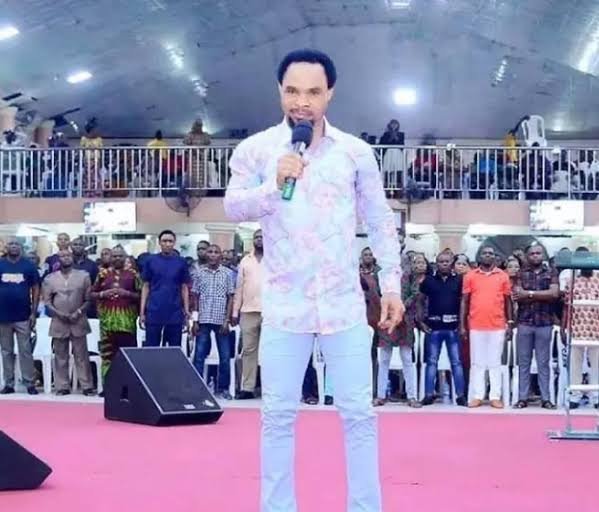 Bida Road, Modebe Avenue, Odoakpu, Onitsha, is usually noisy and bustling during the day, but at nightfall, the place is as silent as a graveyard.

But this was not the story last Friday night, when the Mountain of Holy Ghost Intervention Deliverance Ministry Onitsha, Anambra State, held its weekly vigil at the church auditorium. On that fateful night, the silence was cut by ‘signs and wonders.’

Many things have been said and written about the controversial leader of the church, Prophet Odumeje, whose real name is Chukwuemeka Ohanaemere. Saturday Vanguard, therefore, visited the church that night to see things for ourselves.
At exactly 12 midnight, we walked into the noisy auditorium, a semi-enclosed space with galleries filled to the brim. Sitting at a vantage point, we were able to get a clear view of the pulpit as well as the events that preceded the vigil. Not long after, Prophet Odumeje emerged and the auditorium erupted with excitement.

Decked in a carton colour chinos pant on a multi-coloured long sleeve shirt with his afro-hair gleaming under the sparkling lights at the altar, Odumeje, also known as the Liquid Metal, Indaboski Bahose, or the Lion himself, began to lead the prayer and worship session.
Odumeje’s ministry thrives mostly in the ‘signs and wonders he performs during his service, and the night was not different. Though he did not preach throughout the night, he made sure that the vigil was lively and replete with miracles and testimonies. He began by telling stories of how God called him in 1996 at the age of 18, while he was trading in Onitsha. Odumeje then went on to perform series of miracles that earned him a standing ovation.

During the vigil, the Indaboski” spent most of the time showing videos of some of his life-changing miracles. He made it clear to the congregation that he was neither a comedian nor a showman as being addressed on social media. But his face suddenly changed after the video of comedienne Ada Jesus popped up on the screen. The comedienne, who is currently down with renal disease was in his church last Tuesday with her family to beg for forgiveness.

Lying critically ill on the floor of the church’s auditorium, Odumeje vowed never to forgive her until she brings those she said he supposedly connived with for the miracles she said were fake.

Recall that Ada Jesus in a video that went viral on Facebook had accused Prophet Odumeje of staging fake miracles. She later came down with an ailment that got her paralyzed and unable to speak after she made the allegation in 2020.

Ada Jesus’ mother alongside her father and husband, however, washed off their hands from her predicament, with her mother raining more curses on her that she would never live to tell her story for choosing to lie against a prophet of God.

Thereafter, Saturday Vanguard had an exclusive interview session with the self-acclaimed ‘the Lion.’

Odumeje had severally referred to himself as ‘Indaboski Bahose’, ‘the lion himself’, ‘the fighter’, ‘the war’, ‘the liquid metal’, ‘lebadu’, ‘seplae’, and ‘Radical prophet’.

How I started my ministry
It all started in 1996 when I was selling polythene bags in Onitsha, Anambra state. My mother was mounting pressure on me, telling me stories about Jesus Christ and how He wanted me to serve Him. I was resisting the calling, wondering how a young man like myself would be armed with the Bible, preaching on the streets, when I was supposed to be making money like other young men. I asked my mother to tell that Jesus who had been appearing to her to come and arrest me, without which I would not succumb to the calling.

After many weeks, the Lord appeared and touched me while I was sleeping on the floor. He said, “I am the Lord, I am coming to visit you.” I suddenly got up and started screaming! When I looked at my right shoulder, I saw a kind of red colour imprint of His five fingers on my body. Moments later, a heavy wind started blowing around me, and suddenly, I found myself suspended in the air and I heard a voice from far away from saying “I am the Lord, wait for me. I am preparing and when I am through, I will come and visit you.” I was screaming and screaming! At that point, I became afraid and accepted the call of God without further delay.

The first miracle I performed

Then, I was prospering in my business, as my customers, despite the fact that I would not open my shop on time, would wait patiently for me while I was preaching on the streets. God was blessing me materially. It will interest you to know that the man I served then is one of my pastors today. He has been with me for over fifteen years.

One day, I was lying down when Christ appeared again to me and said “My son, I want you to leave your business and kick start your ministry now.” I felt pained to close my shop and go into full-time ministry.

Moreover, my business was becoming more lucrative. Initially, I didn’t believe my calling was a full-time thing. I thought it was something I could combine with my business. So, when I attempted to resist the calling, one day I was going to supply goods to my customers and I fell under anointing. When I got home that day, I told my mum what God told me and my mum, who was pressurizing me to answer the call of God, said it was not possible, that God cannot tell me to close my shop, which was flourishing. And for the fact that I was the breadwinner of the family. So, I tried to console her as I hit the streets every morning to preach the gospel of salvation to avoid staying idle at home. That was how I went into full-time ministry as a prophet of God.

The first miracle I performed was to deliver a woman from the spirit of madness. She’s been a member of my church since then, though she’s married today. That was how I started going after all my friends, who were bad boys then and led them to Christ.

Though it wasn’t an easy battle, at the end of it all, they all surrendered to Christ. In my calling, I always tell God that He must prove to me that all things are possible to them that believe. I didn’t believe in faith. I would not believe in what I didn’t see. I would see before I could believe it.

Why I don’t get tired on the pulpit

He started appearing to me regularly and explaining a lot of things to me. Then, I used to be stubborn and I was doubting Thomas. But I had to bow to the power of God and started preaching on the streets of Onitsha, with a megaphone. Then, all my friends not only abandoned me, but they were laughing at me. I started avoiding them and spending more time going to the mountain at Okigwe to pray and seek the face of God.

That’s why I don’t get tired on the pulpit because I have strengthened myself with fasting and prayer. He fortified me because He said “I neither sleep nor slumber.” He also told me that he would be proving my doubts with evidence. My life revolves around doubts, and Christ proved everything I requested from Him.

I asked God which power did Elijah use to resurrect the dead and He gave me the spiritual name of the power, and I told Him I want to experience the power. I reminded God what He said in the Bible that “He is not a man that He should lie.” I asked Christ to prove to me what He said so that I would follow the law as He directs me. Christ spoke to my mum about my mission on earth.

That’s why I can do all things through Christ who strengthens me. I asked Him which name shall I call upon. And He said to me “call my name, and I will answer you.”
Why they are calling me a devil
I delivered a woman that somebody took to the river for spiritual healing. I said to her, I will perform this miracle to prove to the world that there’s only one God and one power.

And that man is Jesus Christ. I delivered her of spiritual attacks. She came to the church today (last Friday) to share her testimony. I performed another interesting miracle in a church in Benin, where I was invited to come and preach the word of God.

The only thing I require of you is to fear Lord. I am not like many fake pastors of today, who will speak in tongues, and make incantations just to collect the last kobo from you. And that’s why the Lord cannot allow practical miracles to happen in many Churches because they are full of lies. They are busy cooking up stories that will draw the attention of people to sow the last money in their pockets as seed and even drop their cars.

And that’s also why they are criticizing and calling me a devil because I don’t ask people to pay for my miracles. I try to prove everything to make people fear and honour the Lord. People should not see the Lord as a second option and that’s what many churches are doing today.

Some pastors in the bid to perform miracles will visit native doctors who usually make a mockery of them to acquire powers. That’s why many of them will be saying ‘Ndaboski’, we know who you are, forget it. This is because people don’t know Christ, what they know is the church. And that’s not my mission. My mission is not for people to praise me, I won’t take it. That’s why I move around without security because a clear conscience fears no accusation.

Christ said we should not love them because of what we can get from them. But love them because you want them to know me. That’s why I preach the gospel with anger and dedication. This is because the world is full of confusion and deceit. I practice my own Christianity with evidence.

Bobrisky is a product of witchcraft from hell, Odumeje is a lunatic, ignore them! - Activist