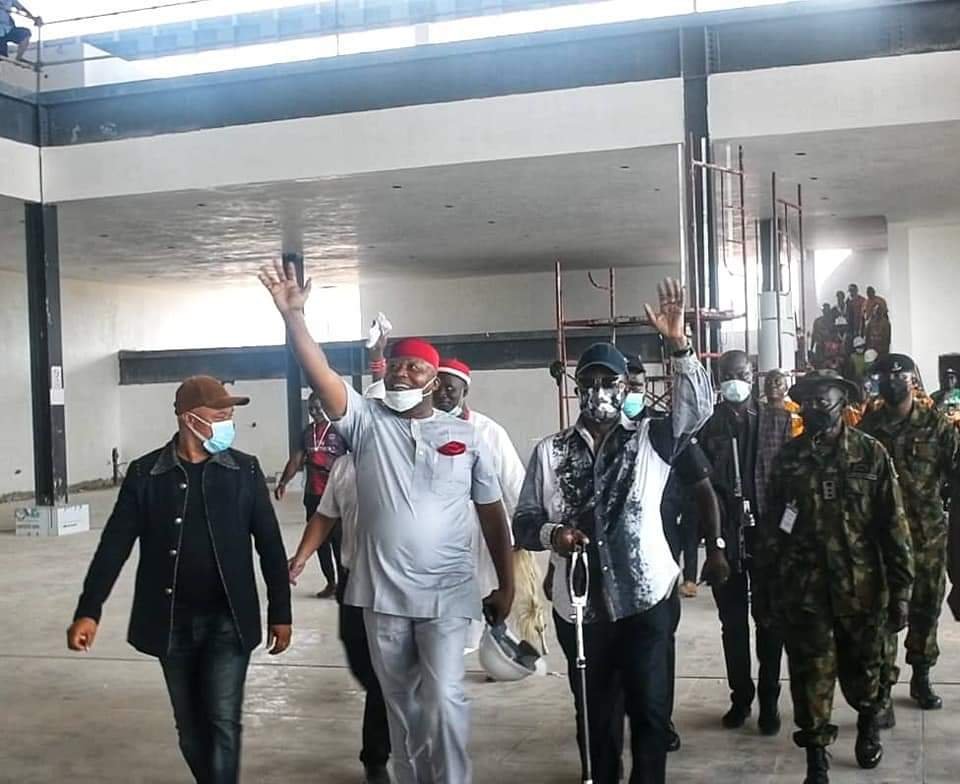 Anambra State Governor, Chief Willie Obiano on Saturday undertook an on the spot assessment of major on going works around the state’s new airport during which he revealed the airport is ready and would soon be commissioned and delivered to ndi Anambra.

He also explained that he undertook the tour with the APGA gubernatorial aspirant Nze Akachukwu Nwankpo, General Lagbaja of the Nigeria Army 82 Divsion with the complement of some of his cabinet members, aides and APGA LGAs Excos in order for them to see first hand what the contractors are doing at the site.

At the Airport Way, Umueri, Governor Obiano inspected on-going roads and bridge projects in the area and told the entourage that their visit was not only to assess the projects, but, to know his government gestures by ensuring the smooth progression of the on going projects.

While inspecting the level of work at the Airport project which is near completion, Nze Akachukwu Nwankpo expressed his satisfaction in the facilities on ground and thanked the governor for his visionary leadership in the state.
He added that history will be kind to Governor Obiano, that he should be rest assured the next government will not disappoint. He said “Your Excellency, this is a demonstration of the fact that you have Anambra at heart. You have repositioned the state to occupy a pride place in the world. Today, what we’re seeing here is quite huge. I’m particularly thrilled by the state-of-the- art features of the Airport. Indeed, history will be kind to you. Be rest assured that anytime you fly into the state, you will be well taken care of”

The Governornorship hopeful added that the Obiano’s administration has been very strategic in its choice of projects, describing the super active nature of the state as sign of a state that is working. Nwankpo said that Anambra is a state that boasts of so much energy and provides opportunities to millions of people.

Nze Akachukwu Nwankpo was later hosted at the governor’s country home alongside other guests where the governor told his guests that Akachukwu Nwankpo is good hearted man. He said “I invited Akachukwu to the airport projects inspection because he is a strong believer of our party APGA. He has what it takes to occupy any leadership positions in Anambra, and Nigeria at large. Here is a good man, very humane and kindhearted. He is a good party man, a strong asset to our great party. Politically, Akachukwu will go places.”

Recall that after the governorship screening exercise, Nze Akachukwu Nwankpo was not cleared by the APGA National Working Committee for the party’s upcoming governorship primary election. The NWC screening report was riddled with unsubstantiated allegations against Nze Nwankpo. And he timely submitted his Appeal. As at the time of this report, the APGA National leadership is yet to attend to the Appeal. Nze Nwankpo had hoped that justice would prevail, but the long wait appears a deliberate plot orchestrated by the known and unknown cabals to deny the APGA members the rights to choose their preferred candidate as the party’s guber flag bearer. while the “imposition strategy” has taken a center stage in the party, Nwankpo has continued to explore legal means of getting his appeal addressed. Nze Akachukwu Nwankpo is civil, and peace loving. He will follow due process and diligence towards ensuring that the injustice meted out on him doesn’t go unchallenged.