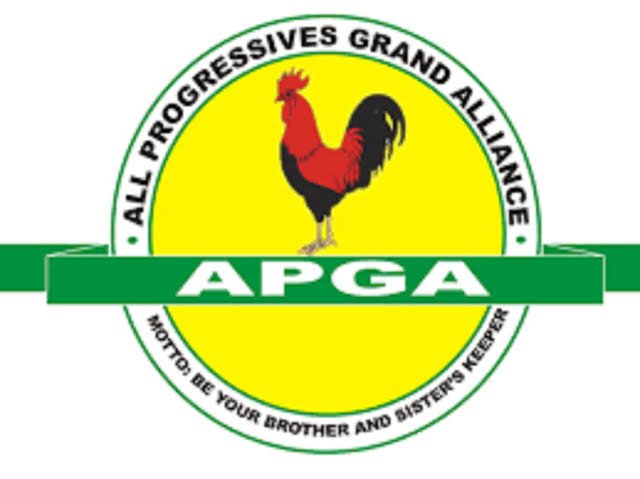 As we continue to engage in diatribes and legal gymnastics on the APGA leadership tussle, one fundamental character whose identity must be unraveled is Jude Okeke. This character has be cast in so many scenes, camouflages and conflicting identities that should compel us to demand for Jude Okeke to show up, if he truly exists.

At some point, his gang addresses him as; (a) Chief Jude Okeke (b) High Chief Jude Okeke (c) Chief Barr. Jude Okeke. It seems the choice of the prefix to the name Jude Okeke either as Chief, High Chief or Barrister, is as the spirit leads. The name Jude Okeke is a shadow.
Observably, a Google search, the minutest form of research, on the purported National Chairman of APGA leaves very little to be desired. The only result that props up is the news of the Press Conference which Jude and his gang granted on June 15, 2021. The implication is that the world does not know anyone called Jude Okeke until June 15, 2021.

If he exists, he must be too small in worth and accomplishment that warrants his cronies to dress in his borrowed and bogus robes. Nevertheless, this has not helped in positioning the pseudonym to match Chief Edozie Njoku.

Come to think of it, a man who claims that he suspended Chief Edozie Njoku and has assumed the prestigious office of APGA National Chairman, in acting capacity; but, has been hiding while his party and candidate prepare for election. Jude Okeke was last seen on June 15, 2021 on a television. Assuming Jude Okeke’s claim, as the Acting National Chairman of APGA is true, how many press conferences has he addressed since then? He has not shown up in any TV station to state his opinion on sensitive and contentious national issues like other people occupying such position do. Why is there hardly any strong internet presence of a National Chairman of a Party? Even the Press Conference held on June 15, 2021 did not get a variety of pictures of the SELF ACCLAIMED Acting National Chairman of APGA.

While the drama and grammar had gone on in the Courts; from Jigawa to Owerri (we have gotten the intel that they are headed to Calabar), it behooves on common sense to reason that Jude Okeke does not exist. He has never attended any court, where his matter is being heard. Is it not obvious that the lawyers on the Jude Okeke matter are merely entertaining the court whilst smiling to the bank.
Therefore, the NJC and NBA Owerri branch should prevail on Emeka Ozoani, SAN that is representing to save himself and the judiciary from obviously looming legendary shame by withdrawing from this matter or produce Jude Okeke forthwith. A learned silk just like Caesar’s wife should live above suspicion.

Recall that on June 14, 2021, a certain Ifeanyi Mbaeri on behalf of the Ozonkpu Victor Oye led APGA published names of governorship aspirants that scaled through their screening. In that list that was made available to journalists and media houses, Hon. Chukwuma Umeoji’s name was absent. The implication is that Umeoji failed the exercise by the Screening Committee. However, he was not alone. He was disqualified alongside Nze Akachukwu Nwankpo, Hon. Nonso Smart Okafor and others. Nearly all of the disqualified candidates by Oye’s Screening Committee have redirected their energy to other Parties in pursuit of their governorship ambition. Presumptively, Umeoji wallowed in the delusional confidence that his agreement with Oye that APGA ticket be reserved for him was sacrosanct. So, when he was rubbished by Oye, he activated his Plan B.

On June 15, 2021, Umeoji and Barr. Imo Ugochinyere, former spokesman for CUPP created Jude Okeke to achieve what he could not achieve with Oye and Edozie Njoku. Jude Okeke claimed that he and his cronies arose from the 114th NEC meeting of APGA, where he suspended Ozonkpu Victor Oye, Chief Edozie Njoku and others. From all intent and purposes, Jude Okeke, Rabiu Garba Aliyu and Kabiru Yusuf are mythical and magical creations of the disqualification of Hon. Chukwuma Umeoji. Clearly, their task was simple, to create confusion and plant Umeoji as the APGA candidate by every means necessary.

A serious and respected society, is one in which the judiciary keep record of human actions and judge them accordingly.
In Julius Caesar, Metelius Cimber’s brother was banished for wrongdoing by a decree of the State. However, Metelius Cimber and other characters like Brutus recruited some crafty minds to prevail on Caesar to lift the ban on Cimber against the rule of the game. Caesar’s response like an incorruptible Judge put his life on the line by making an epic response. Hear him;
‘I must prevent thee, Cimber. These couching and these lowly courtesies might fire the blood of ordinary men, and turn preordinance and first decree into the law of children.’ Caesar’s action should serve as a framework for the ministers in the Temple of Justice.
As Metelus Cimber pressed on, Caesar became more dispassionate in his utterance. He said, ‘be not fond, to think that Caesar bears such rebel blood that will be thawed from the true quality With that which melteth fools….. Thy brother by decree is banishèd.’

We are resolute in our demand for a new APGA. No distraction will appease this cause. Those who argue with the gods must remain on their knees.